Spiel ’13: Playtesting “New Dawn” and “Among the Stars” from Artipia Games

By James Floyd on October 27, 2013 in Interview Tabletop Games

One of the cool things about a big game convention is the opportunity to help playtest upcoming games from different companies. and give feedback to the game designers. While at Spiel ’13 in Esesn, Germany, we had a chance to try out a prototype version of “New Dawn” from Artipia Games. “New Dawn” is set in the same universe as their existing “Among the Stars” game series, but is a standalone game.

We also tested out the original “Among the Stars” game, with the first expansion, “The Ambassadors” – it’s a card/tile placement strategy game that uses a draft mechanic. And we liked it so much that we bought it!  In “Among the Stars” each player is building their own space station, buying new modules for the different alien races to live and work, and trying to earn points for adding to their own station along certain objectives or earning bonuses for keying off certain card types.  “The Ambassadors” adds a new action to the game, with ambassador cards that can provide additional opportunities.

The upcoming game, “New Dawn” has players all building one giant network of planets and space stations together with tile placement, but being able to take control of dempty or even opponent-controlled modules. There’s also a bit of resource production in the game, to help determine which types of station modules you can build or take over – will you choose increased military strength, research, or economic production as your key to victory?

I sat down with game desginer Sotiris Tsantilas to go over the basic concept of “New Dawn” and also check out what other cool games are out this year from Artipia Games, including “Shadows over the Empire”, which premiered at Spiel, and is available from the Artipia Games store after being on Kickstarter. Visit www.artipiagames.com for more info on their existing series of games.

Some of the cards and ambassador pieces in “New Dawn”. The game uses a playmat for tile placement as new areas are explored and tile orientation matters for bonuses. 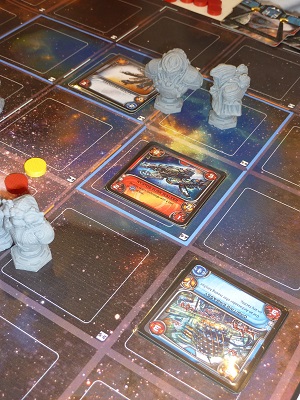