By Cassidy Ward on May 22, 2018 in Comics News Tabletop Games

Aren’t we just the strangest semi-intelligent meat sacks? Despite a likely propensity to sit on the couch and watch enough streaming television, at a stretch, to cause an app concern for our well being, humans are nothing if not doers.

In the relatively short time we’ve walked the earth, we’ve shaped our environment, beat out predators we had no business scrapping with, and carved out a world that’s so comfortable we’re bored as hell.

So we invented games.

Games, once upon a time, were a training regimen. In the same way the tiger cub plays with its siblings in order to one day be an effective murder machine, competition among early humans taught useful life-skills that put food round the fire and a little distance between tooth and claw.

Remaining bodily whole and acquiring food no longer require the ability to chuck a spear or wrestle a giant sloth into submission. Those necessary feats can now be accomplished by never going outside and summoning pizzas through mystical electronic rituals. But that doesn’t mean we don’t enjoy the thrill of the hunt.

There are few better feelings than launching a blue shell or dropping a draw-four on an unsuspecting foe. With the increase in technology the games we play have changed. Video games introduced a virtual landscape and single pixel avatars have been replaced by highly rendered, photo-realistic worlds. We’re on the cusp of usable and readily available virtual reality and you can play any game you like with anyone you like, anywhere on the planet, all the time. So it may be surprising to some that low-tech, intimate gaming experience are on the rise.

Tabletop gaming is enjoying a renaissance as more and more people gather round a table in their homes or anywhere with a solid, flat surface, to… *wait, this can’t right* IMAGINE things. With their minds.

It turns out, according to rising sales of board games over the last decade, we’re not quite the anti-social cave crabs some would have us believe. And some of us regularly engage in intentional, group hallucinations of far-off, no mind-altering substances required.

Perhaps it’s a response to the encroaching isolation fostered by our modern lifestyle. Maybe it has something to do with the democratization of creation, allowing anyone with a good idea to make something and deliver it to the world. Maybe it’s a bit of both or maybe it’s just that tabletop gaming is just good, solid fun. Whatever it is, there’s probably a game out there that’s perfect for you and your friends, and it’ll give you something to do while you shlock back beers(mind altering substances aren’t required but aren’t absolutely discouraged. Drink responsibly!). Maybe the game you’ve been looking for is this one.

Imagine a world where limitless power is available to all, not power for juicing your tech but for juicing you. SuperAge takes place, as the name suggests, in an age of super heroes. Players create their own characters, deciding on their abilities and power levels. The Game Master then creates villains to balance the scales and a battle for the ages (the Super Ages, mind you) begins, with you at the center, flat on your face, begging for mercy.

If ever you’ve wished to be Spider-Man or Swamp Thing or Dr. Manhattan or that unstoppable mistress of medium-sized rodents, the Unbeatable Squirrel Girl, this is your chance.

Helmed by Strange Machine Games, the team behind the upcoming trio of Robotech board games, SuperAge is a crowd-funded game promising an array of super stories and harrowing adventures limited only by your own creativity and imagination.

At the time of this writing, SuperAge has almost doubled its funding goal with 16 days left on the clock, and with the support of a team with a proven track record to deliver on projects, there’s no question you’ll get what you pay for, should you decide to answer to clarion call of the hero. Cue the Mission Impossible music.

Funding acquired doesn’t mean they don’t need more recruits, there are stretch goals to consider, the first of which, an in-world short story penned by Bryan Young, has already been met but further stretch goals will improve the product at the same price point to you, the player.

According to the campaign on Kickstarter, most of the artwork has already been acquired and based on the samples available, it’s going to be a stunning game. Character designs feel pulled directly from comic books of the nineties, while still feeling at home in a future apocalypse. Though, I’d be remiss in not mentioning, that also means there are some unnecessarily scantily clad women present. 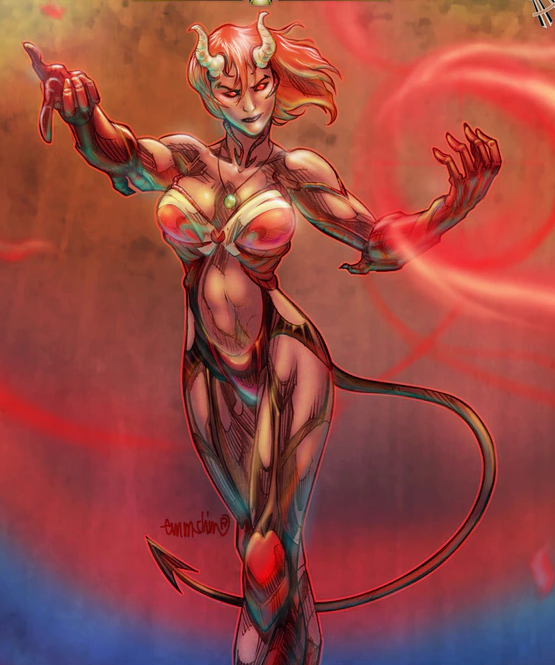 This demon is not appropriately dressed for a lifetime in a flaming hellscape!

The campaign ends in little more than two weeks with an estimated delivery date of May next year. If you get hold of a copy, be sure to let us know what you think and remember, crush your enemies, for the honor of your ancestors!