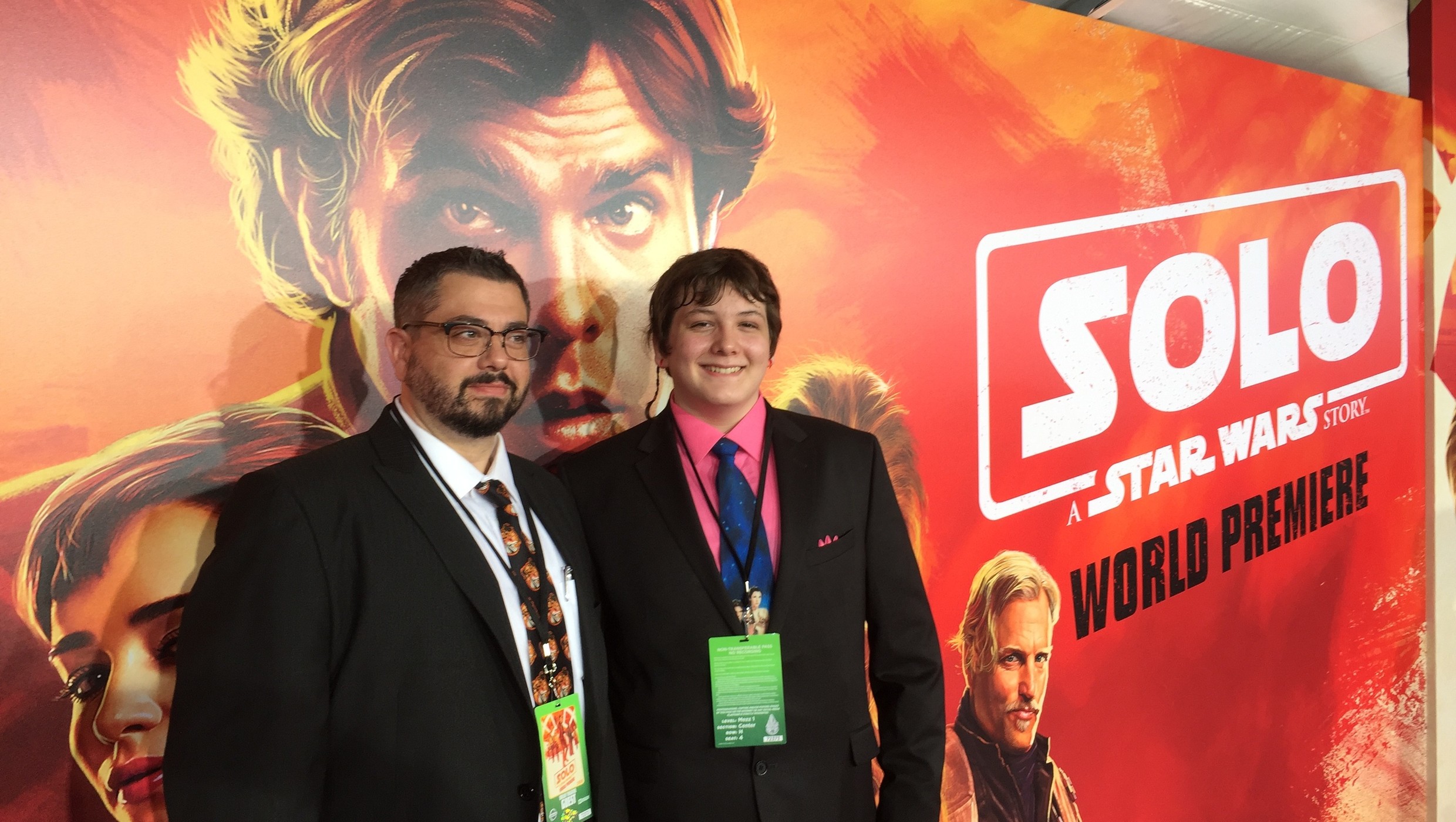 Solo: A Star Wars Story premiered before its first audience on May 15th and I was on hand to document the experience. Hollywood red carpet premieres are unlike anything I’ve ever been to and Solo was no exception.

The first thing you notice is that an entire city block is closed to traffic. The red carpet spanned an entire block of Hollywood Boulevard and a Millennium Falcon was erected there in the middle of it, making for all the best photo ops.

As your progress through the city block of red carpet, there are various photo ops for you to take pictures with, all the while the press lines up against one side, snapping photos of all of the more famous attendees. In fact, if you’re not sufficiently famous, there are parts of the red carpet you can’t even really get to.

Security is, obviously, tight. Your name gets checked on a list before you’re even allowed to get to security, then you get checked through a metal detector, then you have to show ID to get a pass before you’re let anywhere near the red carpet. Then, as you approach the theatre, they take your phone and lock it in a bag. Once you’re inside, it’s complete radio silence for everyone.

They piped the Star Wars Show’s live stream into the theatre so we had some pre-show entertainment while we couldn’t look at our phones. That’s an interesting experience in and of itself. You’ll spot people walk up the red carpet on the live stream, then watch them file into the theatre shortly after. Then you look around and see people like Kyle Newman or Johnny Knoxville sitting in your proximity.

When George Lucas finally filed into the theatre, the crowd erupted into applause. Some people stood, offering him a standing ovation. There was an energy in the air and everyone knew this man made it possible. The cast and crew arrived and took their seats…

And then the movie began.

The experience of seeing the movie there, with the makers of it in the room, is electric. There were laughs and gasps in all the right places. More than once, the audience dropped their collective jaws. The credits rolled and everyone stayed, clapping every time they spotted a name of someone they knew or liked. The FX team got as much applause as the cast (though maybe no one got more applause than our new Han and Lando.)

After the lights go up, there are huge lines to get phones unlocked. When there’s a delay in seeing that reaction on Twitter? That’s the reason. Everyone is getting their phones out and getting ready to offer their quick reaction. I mean, at least those of us in the press were.

It’s hard because you want to express your opinion, but not get into detail. How do you capture the excitement you felt without giving anything away?

Then, once your phone is secure and your tweets are made, you get funneled up to the after party.

Bars lined the perimeter, as well as photo ops. Costumes from the film are stationed on pedestals around the crowd. Tables are set up everywhere and people congregate to talk about the movie. And everyone is there. One crowd congregating contained Ron Howard, Bob Iger, Kathleen Kennedy, and Lawrence Kasdan. Past actors from Star Wars films were around, too, ranging from Mark Hamill and Ewan Mcgregor to Ray Park and Daniel Logan. The animated universes of Star Wars were well represented, too, with people like Dave Filoni, Sam Witwer, and Taylor Gray.

I got a chance to tell Jon Kasdan how much I liked his movie and one could sense a relief that it was out there and there were finally people he could talk to about the twists and turns the film made. That relief and joy of a film that played well was palpable with every conversation I had with anyone behind the scenes. There was a sense of relief among the fans I talked to as well. They’d done it with this movie.

After a time, the lights turn on. Security begins turning people out. The Falcon is half dismantled and the streets of Hollywood become a venue for discussion. Then exhaustion takes over, sleep is needed, but you’re still buzzed from the experience, but sleep eventually wins.

That’s the only way to describe it.

For in-depth discussions of Star Wars, including a review of Solo, be sure to listen to the Full of Sith podcast.