By Jessie Hough on January 22, 2017 in News Tabletop Games

After many months of competing through backorders here in the States, I was finally able to secure a copy of Food Chain Magnate, the restaurant empire-building game from Germany that has somewhat divided fans of Euro Games (tabletop games produced in Europe that feature layered engine or resource management). This physically lightweight yet extremely weighty deck-builder features modular boards on which you will build, manage, and advertise your growing chain of fast food restaurants. To win you must make the most money by the end of the game when the bank has “broken” and run out of funds to distribute amongst the 2 – 5 players at the table.

It’s important to note that this game is deceptively inviting. The design of the box, colourful wooden components, and glossy cards are perfect examples of 1950’s Americana, and the names of individual restaurants (such as the “Fried Geese and Donkey”) are clever and fun. If one were to buy the game based on its beautiful box art and quippy flavour text, they would likely be very surprised to find this game is definitely not one for a general audience. I also strongly recommend against picking this one up to play with your family unless you have already exhausted every other Euro game out there and truly want a challenge. Players need to be committed to a 2 – 4 hour concentration fest with strict rules and an unforgiving difficulty curve (heavily dependent on the skill of the players at the table).

For your first, tutorial game, you’ll remove the achievement bonuses and salary requirements that you would normally have to pay your staff every round. Each player begins with just one restaurant on the board and one CEO card that must always go into play every round. As the CEO, you never get a vacation away from your growing empire! The CEO is also the top of the corporate ladder from which you can play cards, and you are only able to create three “branches” to file your cards within each round. If you have additional cards that can’t fit within the structure, they get a round off to “go to the beach.” This constraint makes the order in which you recruit your staff very important and sometimes a game-ending concern. 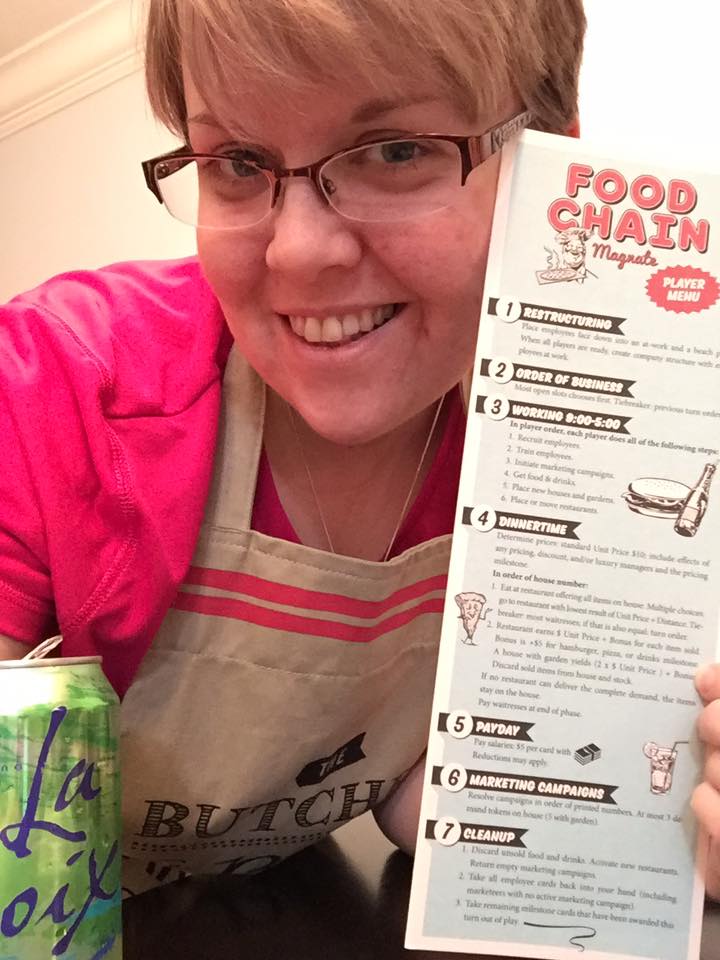 Without diving too deep into what is a lengthy rule-book and action list, players will take turns drafting a wide variety of employees, managers, trainers, cooks, wait-staff, and more as well as trying to get benefits from the cards they are able to play every turn. The goal is to attract the “mindless” residents of the surrounding neighbourhoods to come into your restaurant and gorge themselves on burgers, beer, cola, pie, or pizza. Ah, but how do you attract these so-called mindless residents? With marketing staff and campaigns, of course! Not only will you be managing your restaurant, its staff and your corporate structure, but you must also hire for and deploy marketing campaigns in order for demand for your restaurant’s products to even sell. If no demand is put in place, then nobody will seek out the restaurants popping up all over the board. 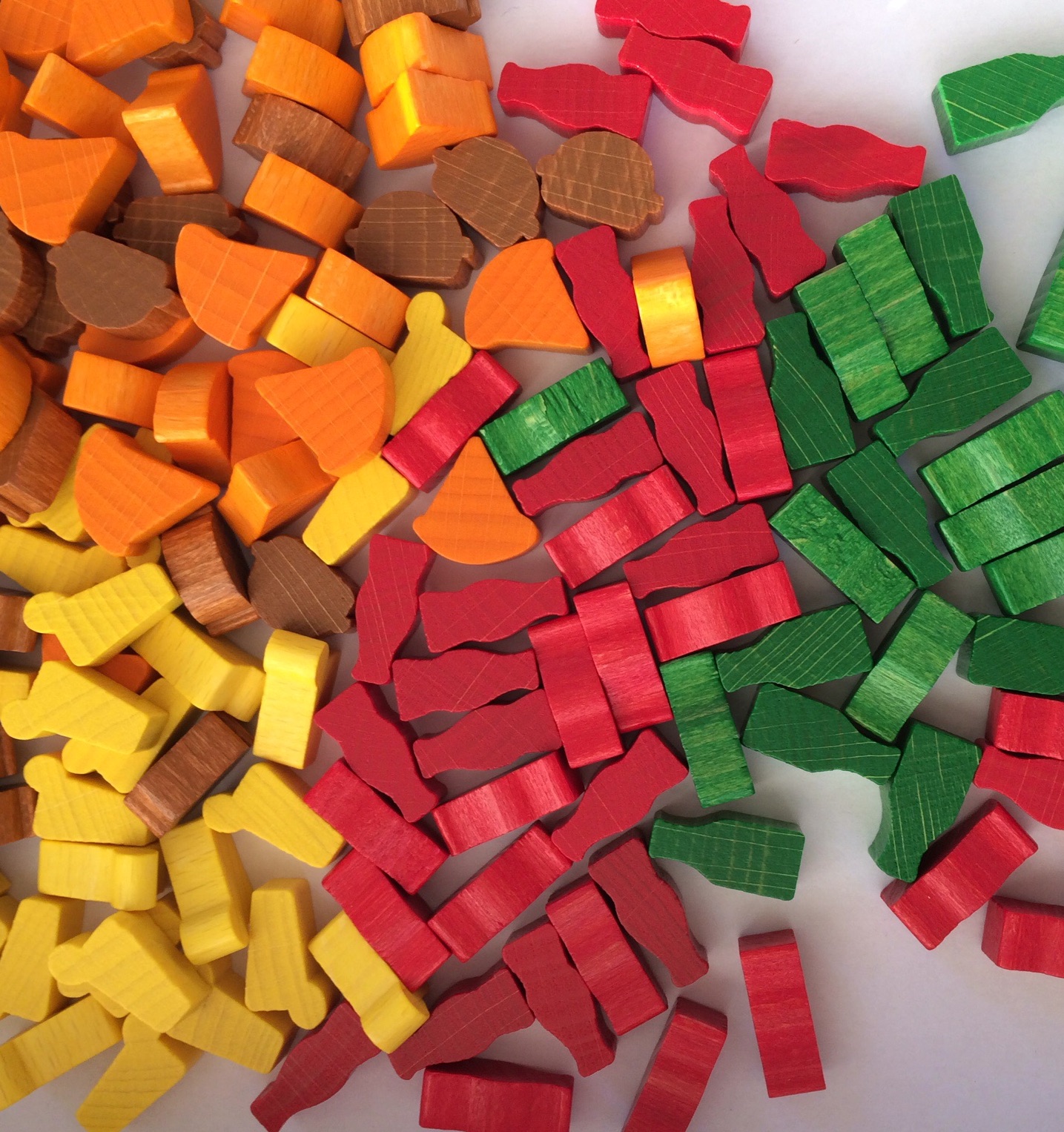 At the end of our play-throughs I did feel as though that I was starting to get a handle on how to properly build a deck without feeling like I was always several turns behind my competition, but even then I don’t think I was really having any fun yet. I generally like complicated deck-builders and complex engine-management games, but something about this was so obtuse that I was having a very hard time getting into it. The player turns resolve all actions individually so you have to wait for each player to go through their entire turn order before it comes around to you. Since it doesn’t really take that long to think about your turn in advance, you do spend an awful lot of time waiting and that’s definitely to the game’s detriment. Although I am also fine with thinking two or three turns ahead, I do get pretty anxious when I know that one mistake could potentially end the game for me, and result with me being yet another person at the table that has to “play through” for the rest of the players at the table. I haven’t quite written the game off yet as I do think it deserves at least another play-though or two, but since I have already invested around four hours I have to say things are not looking good for Food Chain Magnate. 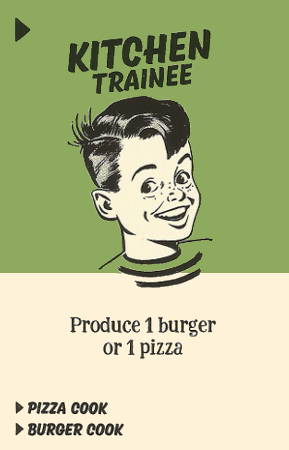 All I can say is, if you do pick this up for yourself, be sure you absolutely love complex deck-builders and that your fellow players are all of relative skill levels. Whatever you do, just don’t draft the “Kitchen Trainee” on your very first turn! Anyone who knows anything about deck builders will go straight for the “Recruiting Girl,” “Marketing Trainee,” or other fast-starter and you will never be able to recover from your misplay. For the obtuse instructions and somewhat unreasonable learning curve, I give Food Chain Magnate 2 soggy burgers out of 5.