By Bryan Young on May 26, 2015 in Reviews Star Wars Tabletop Games

I’ll be honest, I was skeptical about this game. Based on the look and design, I wrongly assumed it would simply be a rehash of the “X-Wing: Miniatures” game, but on a slightly larger scale. I couldn’t have been more wrong. 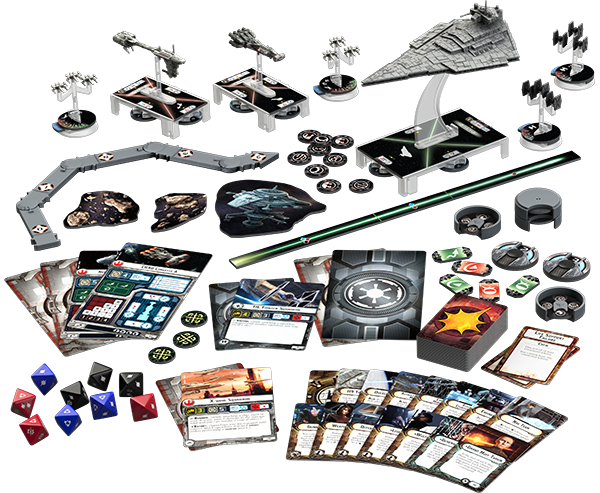 The mechanics are similar enough to the “X-Wing” game that fans of that game will have no problems dropping quickly into “Armada,” but they’re different enough to create a completely different gaming experience.

“X-Wing” works on a micro level. The skill of the pilot and the quick thinking of the player is where all of the gameplay happens, but “Armada” is almost the opposite. It’s much like a chess game where you, as the commander of a fleet, must be thinking two, three, four turns ahead or suffer severe consequences. You have to anticipate moves and sometimes it can take three turns to correct from a bad call.

As I commanded my Star Destroyer, I couldn’t help but find myself transported back to “The Empire Strikes Back” or “Return of the Jedi,” imagining myself as Captain Needa or Admiral Piett. Watching them command their starships, or reading about that command in books like “Heir to the Empire” with characters like Grand Admiral Thrawn, I was transported into that experience playing this game. It made me feel like I was commanding a fleet, which is the great thing about most of Fantasy Flight’s games. With “X-Wing,” they were able to manage to simulate the experience of dogfighting on a tabletop. With “Battlestar Galactica: The Board Game” they make you feel the urgency and mistrust of the show. Their best games offer the feeling of a thing, and “Armada” perfectly delivers the tabletop equivalent of being the captain of a Star Destroyer or the admiral of a fleet.

This is a game that will now make its regular rotation on my game nights.

The experience level required is a little different than “X-Wing,” though. In the “X-Wing” game, my son could pull victories out of his hat with seemingly illogical maneuvers and flying stunts, “Armada” requires much more careful thought. He’s 13 now and had to rethink how he played in order to survive. It’s not impossible, but the strategy element was much higher than “X-Wing.”

Overall, I think this game is a solid entry and logical next step for Fantasy Flight and I can’t wait to get my hands on future expansions.

My only complaint about this game (and “X-Wing”) so far? Still no prequel era ships. I’d love to see how a squad of Naboo starfighters handle against TIE Fighters, and I’d love to see X-Wings face off against Trade Federation starfighters. And wouldn’t it be cool to lead a raid against a Trade Federation capital ship? I think there needs to be more prequel era across the board in Fantasy Flight’s offerings and this might be a good and easy place to start.

You can get “Star Wars: Armada” at your local game shop or order it now on Amazon.