ALADDIN 8 out of 10; Directed by Guy Ritchie; Written by John August and Guy Ritchie; Starring Will Smith, Mena Massoud, Naomi Scott, and Alan Tudyk; Rated PG for some action/peril; Running time 128 minutes; In wide release May 24.

Bringing Disney’s 1992 animated hit Aladdin to the big screen in a live action production is no small feat. The Broadway version removed Abu and Iago (no doubt due to logistics), but the magic of computer animation returns these characters to the beloved tale of a boy, a Genie, and a princess.

Interestingly, the new film probably utilizes as much if not more animation than the original film for Will Smith’s Genie alone. And though I think many questioned his casting because, let’s face it, they’d question anyone not the late great Robin Williams, Smith makes the character his own. With perhaps a bit less improv and more subplot, the Genie no doubt will endear himself to a new generation of audiences.

My one complaint would be the Genie’s eyes. Did they really need to CGI Smith’s eyes to such a degree? Very unsettling. Like Renesmee unsettling if you know what I mean. (I hope you don’t.)

The basic story remains the same: street rat Aladdin (Mena Massoud) has a chance encounter with Princess Jasmine (Naomi Scott) on the streets of Agrabah and begins to dream of a better life. An opportunity comes in the shape of Royal Vizier Jafar (Marwan Kenzari) who presents him with a quest to obtain a magical lamp from the Cave of Wonders. Returning as the Cave’s voice is Frank Welker, voice talent extraordinaire and also the voice of Abu and Rajah in the 1992 film.

Of all the talent in the film, I was most disappointed with Jafar. His character went the opposite of Jonathan Freeman’s out of control, snide, slimy villain–Kenzari’s Jafar is soft-spoken, mostly mild-mannered (a facade, of course), and, quite frankly, dull. Iago (Alan Tudyk) is more sinister. And couldn’t he have called Aladdin Prince Abubu just once? Missed opportunity. Unless he did and I missed it.

Jasmine, however, is the standout in the film. She has a role that moves even beyond her expanded story in the Broadway version. And a new solo song that I think will resonate with a lot of women. Her handmaiden/best friend is played by Nasim Pedrad, and can we talk a moment about Jasmine’s costumes? Beautiful corseted pieces that probably aren’t remotely historically or geographically accurate, but this is a fictional land, right? The colors are vibrant, and there’s so much sparkle! 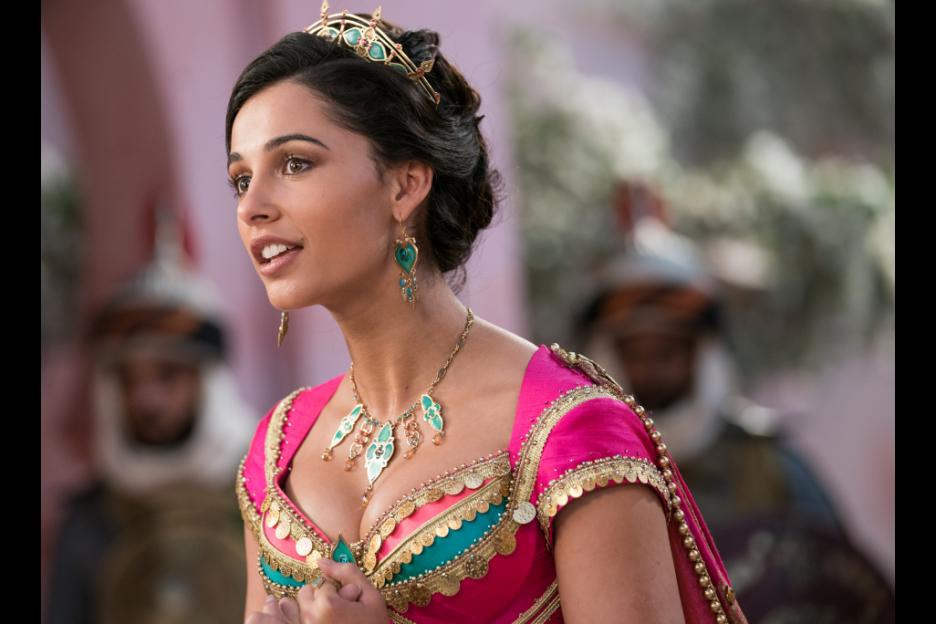 By the way, if you’ve seen the movie, did you get a Newsies vibe during One Jump Ahead? Not sure if it was the dancing or the music or both. Probably the new arrangement of the music, as Alan Menken wrote for both the animated film and the new one, as well as composing for Newsies.

And finally, the director. I might have forgotten it was a Guy Ritchie film (not nearly as much violence as in his other films) except for several instances of extreme slow motion. And immediately it brought to mind his Sherlock films. I think that style is a bit unusual for a Disney adaptation, but I feel it worked for the specific scenes where it was used.

Overall, a fun, faithful adaptation with some new twists and turns.