By Jessie Hough on July 10, 2017 in Comics News Television

Freeform announced today that titular character Doreen Green, AKA Squirrel Girl, will be played by Milana Vayntrub of This is Us fame in the upcoming series New Warriors. Just three months since we first heard the show was being made, the cast has been set and presumably production will begin shortly. Fans of Squirrel Girl and Marvel are understandably excited; it means we’re one step closer to getting a series with one of the most beloved 2nd (shhh no, not 3rd) tier Marvel properties in recent years. The 10 episode pilot season will follow Night Thrasher, Speedball, Microbe, Debrii, Mister Immortal, and everyone’s favorite Unbeatable Squirrel Girl.

So why am I so skeptical? I promise it’s not just middle aged cynicism; I have some grounded concerns that originated this morning when I nearly spit my coffee out reading the following promo line in the press release,

“The duo leads the ensemble cast in the 10-episode series about six young people learning to cope with their abilities in a world where bad guys can be as terrifying as bad dates.”

BARF! Please, for the love of Galactus, tell me some hapless intern or PR monkey taped to a keyboard is writing these releases with no idea of what is actually going to happen in the show. But alas, I continued to read other promotional scripts that included, “With Freeform focused on a group dubbed “becomers” – those experiencing a series of firsts in life, including first loves and first jobs – ‘New Warriors explores the journey into adulthood…”  If this is truly the driving theme of the show, without the willingness to push boundaries, take risks, and write original material, I fear we are probably going to miss out on the one chance to do Squirrel Girl justice. The following is my plea to the executives. Please, give us the Squirrel Girl we love, not the one we’ll forget. 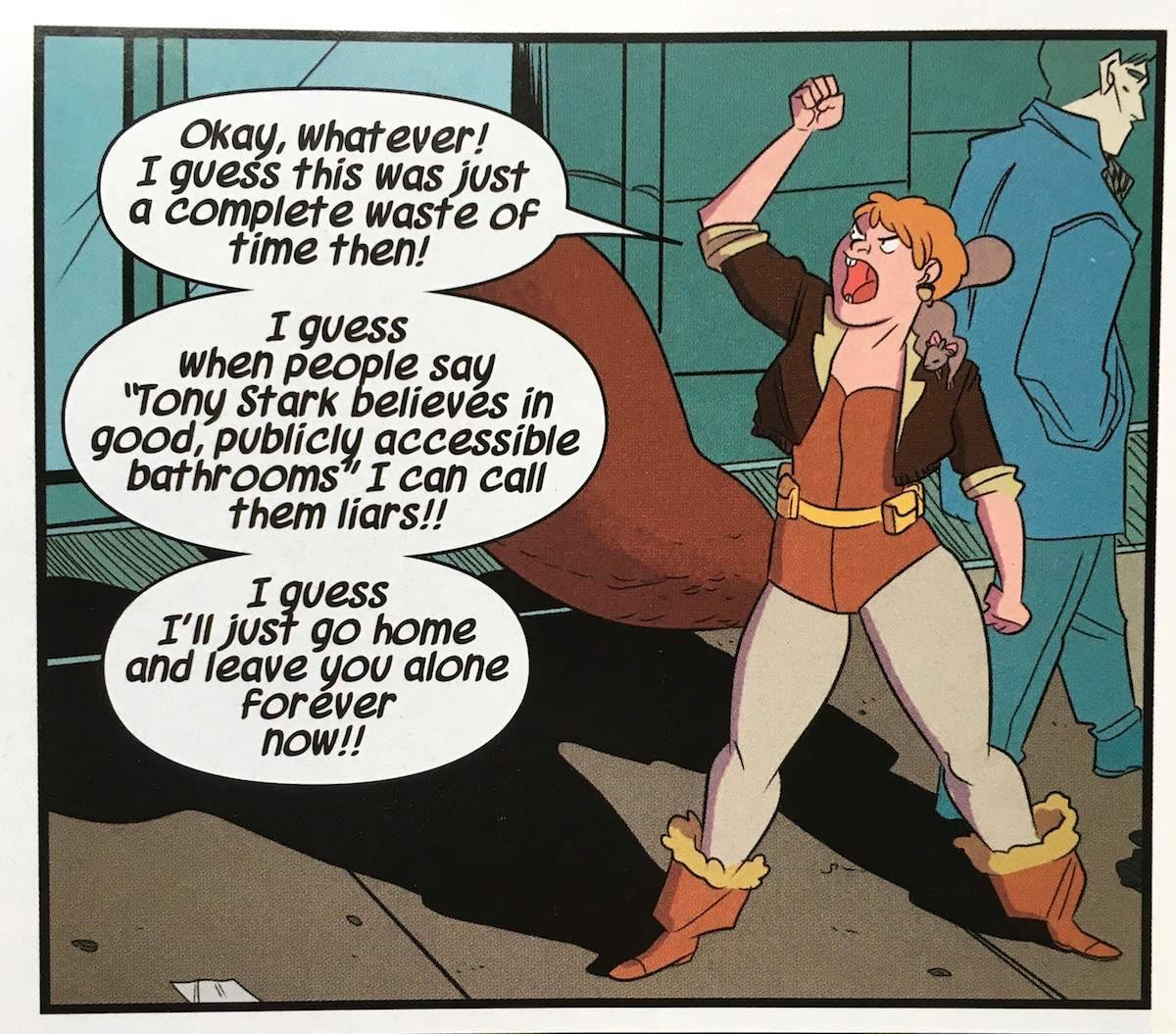 Hey there. I haven’t watched you much since you renamed yourselves (again), but I hear you’ve been doing pretty well despite your insistence on continuing to air The 700 Club (resists urge to throw up). I gotta be real with you: I wasn’t super thrilled that you were the network to land New Warriors. Yes, I’d love to see the show get made, but not if you’re going to water it down into a socially conservative YA drama about dating and life after graduation. We just don’t need that show; nor do I suspect most Marvel fans even want a show like that all that much either.

You know as well as I do that young adult programming has a long way to go in terms of creating content that challenges and redefines the thousands of tropes that shackle it. Marvel’s straight to Netflix series have proved that even with lesser known (albeit much more adult and violent) heroes you can avoid many of the mainstreaming tropes that comic properties have been saddled with for so long. The catch, though, is that Netflix has the freedom to avoid so many of those pesky broadcast restrictions, and the shows they’ve picked up so far have a much wider appeal given that they’re catered to a more mature audience. You are a cable Network with limited assets and a history of airing some of the safest (boring) shows on television. Still, even though young adult shows haven’t really had the post-streaming-world revolution they so desperately need, you could make a difference here if you were willing to be the network that nuts up and takes some chances. 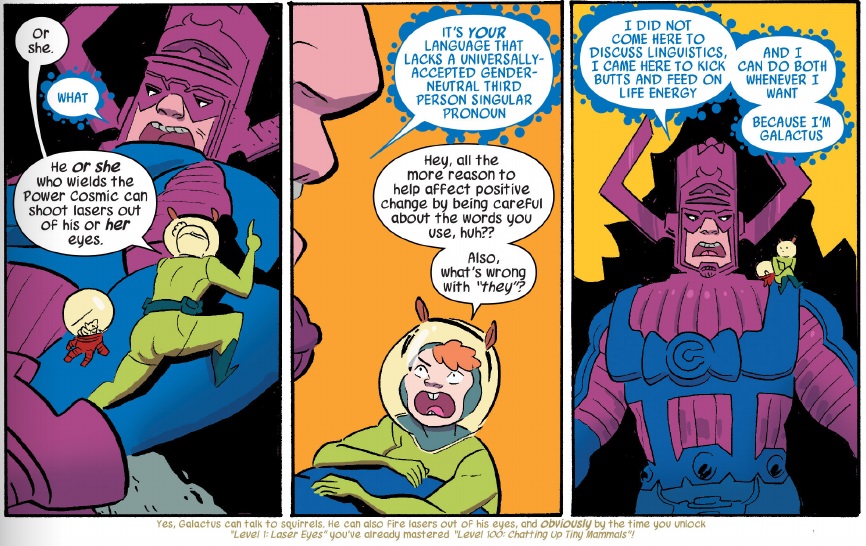 New Warriors would be a fantastic show to push the boundaries, Hell, it could even be the Buffy the Vampire Slayer of this generation! Remember when Angel absolutely destroyed Buffy both physically and psychologically (seriously, almost killing her) only to return and make her love him all over again? Now THAT was some risk-taking, young-adult programming AND it aired on a broadcast network in the 90’s! If you’re going to throw coming-of-age-themes and romance into the mix, look for every opportunity to make your audience believe it’s a necessary part of the character’s story. Don’t make us follow around Doreen on dates just because she “should.” Squirrel Girl doesn’t put anything before her saving the world responsibilities, and you shouldn’t either. Don’t force us to watch Doreen balance dating, school, and maybe punching a poorly costumed villain for five minutes at the end of an episode. You can do better. You SHOULD do better.

If your executives are smart (and I don’t generally assume them to be) they’ll look to the creative team that brought Squirrel Girl back from the fading obscurity of her Great Lakes Avengers days – Ryan North and Erica Henderson. These two took a character that had been largely forgotten and revitalized her into one of the most lovable, genuine, smart, and humble Marvel heroes in the past decade. Doreen looks every bit like an average college student and she stresses out over her computer science degree, but the subtleties that make us love her are what make her so incredible. She’s whimsically quippy, unwaveringly positive, and un-ironically upbeat; she has no time for social norms and she very politely doesn’t take shit from anyone. 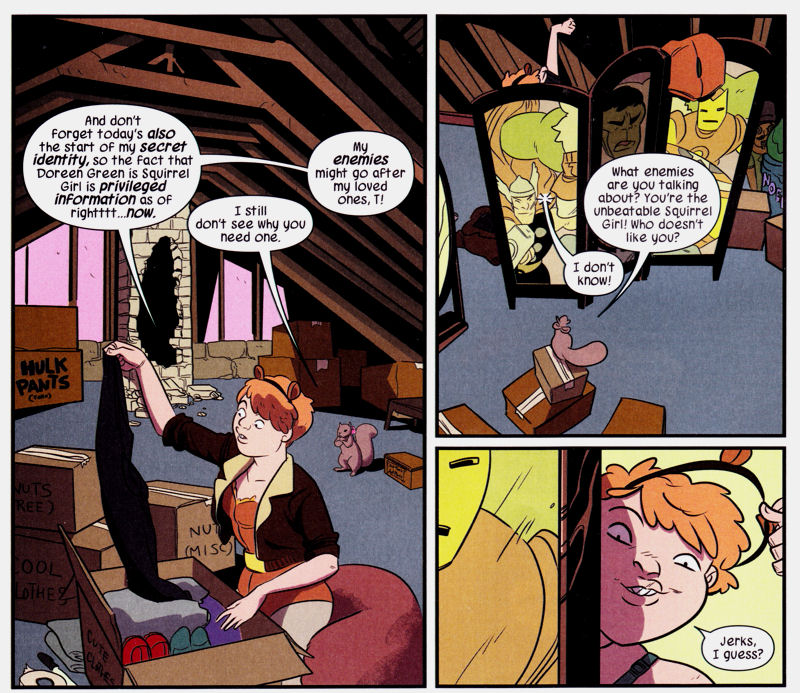 Doreen Green as both a student and a superhero is a modern-day, positive role model getting a computer science degree while fighting some of the most dangerous villains in the Marvel Universe, never once stopping to ask if maybe she’s in a little bit over her head. She doesn’t quit even when the odds are hysterically stacked against her. Seriously, her entire set of 4522 Deadpool trading cards give her more than enough information (usually) to know what she’s going up against! 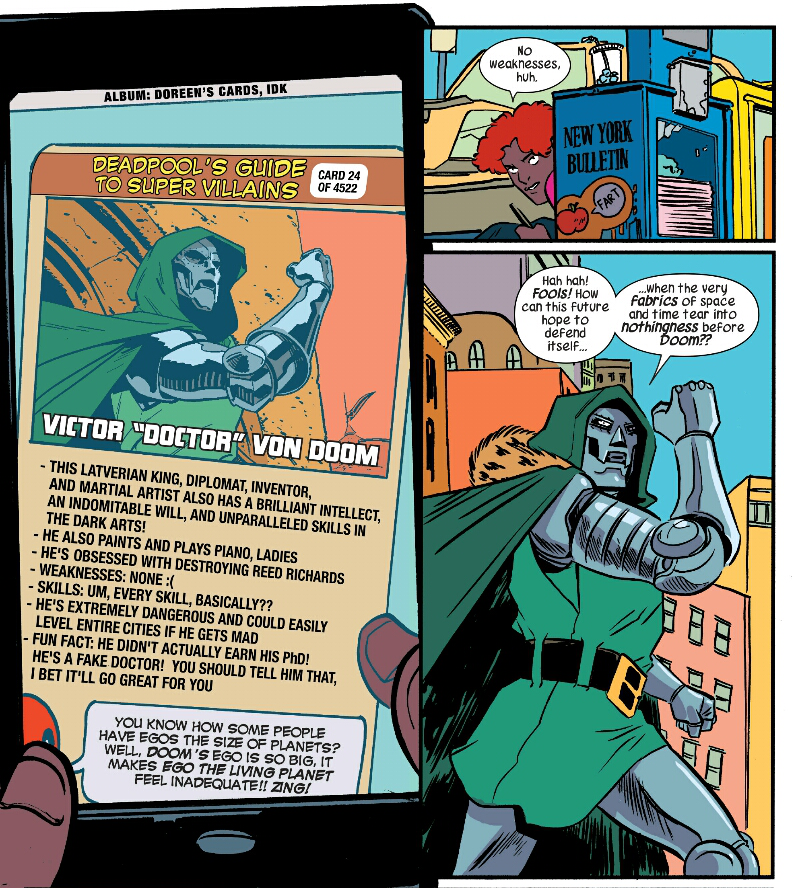 And yes, admittedly, a few comments get made every now and again about her checking out a male classmate, but the dialogue is written to serve more as comedic backdrop and further evidence to Doreen’s commitment to being Squirrel Girl than driving any aspect of the story. We love Doreen not because she’s a hero running around doing everyday college student things, but because she’s an everyday college student running around saving the world and doing anything BUT the ordinary! You try maintaining a 4.0 grade average when you somehow need to make it to the moon before the Galactus Clock runs out! 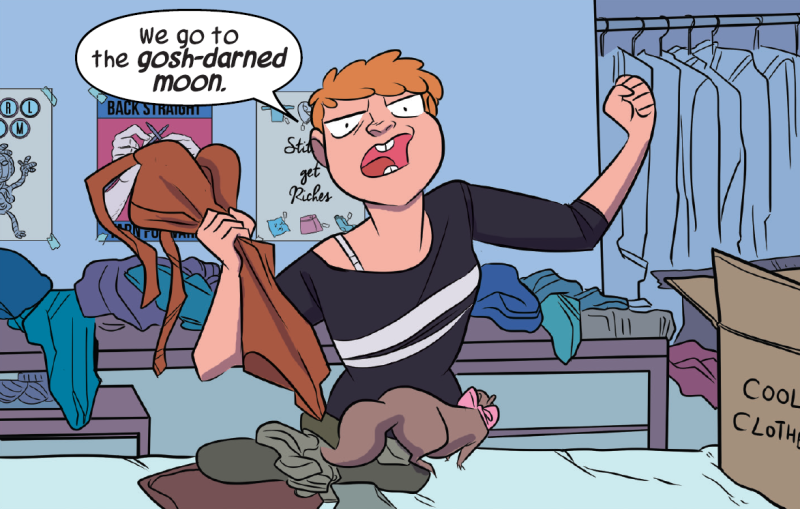 To summarize: Please, don’t give us what we already have way too much of. We don’t need another bland, coming-of-age-drama with a superhero IP haphazardly taped over it. We need a show about new, young heroes that just happen to need to make a jillion complicated decisions in a given day to balance life and heroics. Go read North and Henderson’s SG comics. Go watch Spider-Man: Homecoming, which was both pretty great and went a long way towards something fun and new despite still putting their feet in some tropes. If you’re going to trope it up, make them into something we haven’t seen done the same way a million times before. Just please, for the love of Marvel, don’t f*ck up Squirrel Girl. You could doom her to a fate worse than Thanos getting his hands on those infinity stones, and we don’t want to lose her to obscurity again. 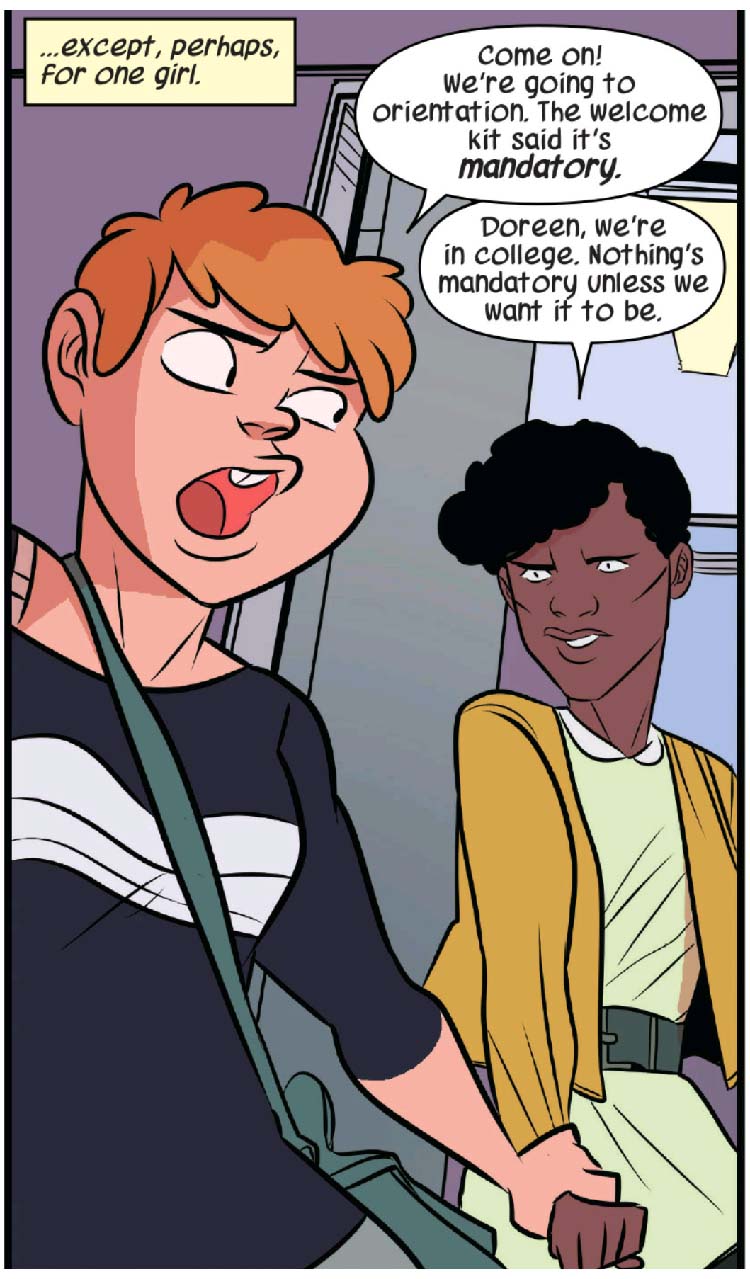