By Cassidy Ward on November 25, 2015 in Comics Movies News

The history of Christmas, like most holiday festivals, is a long and convoluted evolution. The modern interpretation involving an entirely positive event of reward for good behavior and a jolly grandfatherly figure, it turns out, is a grand diversion from its mythical origins.

Tracing the holiday back leads down as many paths as there are cultures that celebrate it but in Germanic cultures Santa Claus was only one half of the story. He represents the good, the celebration of virtue, and the rewards that come along with it. But he has a dark companion, a shadowy brother who knows only punishment and terror. The Krampus is a horned figure with goat like features who punishes children for their wrong doings, kidnapping them, and taking them to the underworld. It’s hard to believe Germanic children of old would have been anything but rainbows and buttercups during the winter months with the threat of an evil goat creature looming over them. 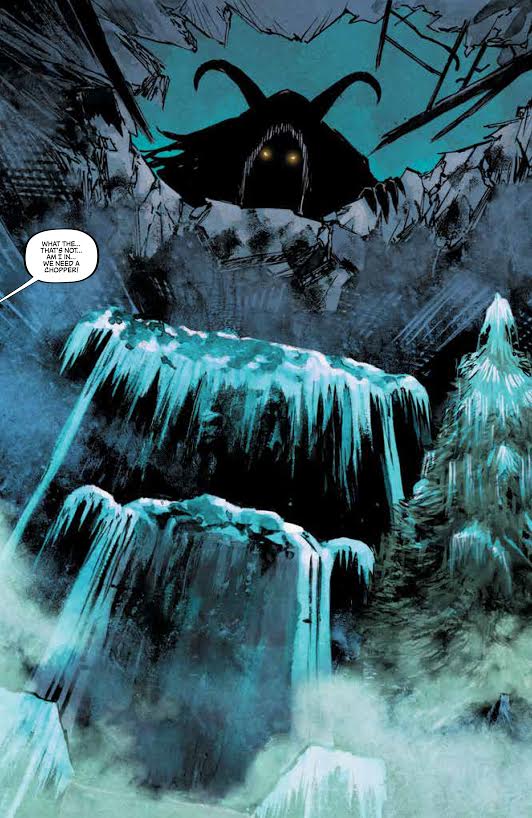 Despite the obvious similarities to another cloven footed horned character of the Christian culture, many scholars believe that Krampus pre-dates the adoption of the winter festival by Christianity and goes back as far as the pagan festivals that were Christmas’ earliest origins. It would make sense that during a celebration that celebrates the bounty of life before the looming death of winter a character like Krampus would fit in quite nicely.

Once the modern version of Christmas took hold, the story of Krampus was largely lost to public consciousness but history and the internet driven global culture has allowed it to resurface and the character has begun to permeate the global hive mind once again.

It’s about time that he got his own holiday movie and Legendary has done just that with “Krampus,” a black-comedy-horror flick premiering December 4, 2015. The film, written by Michael Dougherty (“Trick ‘r Treat”), Todd Casey, and Zach Shields tells the story of a family on Christmas Eve trying to survive when Krampus comes to town.

Krampus balances humor with horror in a wholly satisfying way.

In an effort to more fully introduce the world to the Krampus mythos, both arcane and modern, the film’s writers put together an original story and assembled a team of writers and artists including Laura Shields, Christian Dibari (“The Warriors”), Maan House (“Witchblade”), Stuart Sayger (“Bionicle”), Michael Montenat (“Hellraiser”), and Fiona Staples (“Saga”) to create a four part comic book titled “Krampus: Shadow of Saint Nicholas” that compliments the movie.

Each section features a different main artist with colors by Mike Spicer and Guy Major, and cover art by the talented Fiona Staples. The stories take us into a world involving a drunken commercial Santa Claus, police officers, unsolved murders, homelessness, excess, not a few possessed toys, and of course the titular demon.

What begins as a handful of seemingly unconnected vignettes soon comes together into an entertaining singular story with various threads, all of which tie together neatly by the end. Krampus balances humor with horror in a wholly satisfying way and the characters are interesting and well written. I’ve never laughed so hard at a wise cracking lush in a velvet suit and I don’t expect I will ever again.

My experience most often with prequel comics is that they never live up to the material they’re set to introduce. In most cases that is a scathing indictment of their failings but in this case it gives me hope for the movie. I found myself earnestly enjoying the book from the very first page. No, that isn’t true, I was already smiling half way through the introduction and while some sections are stronger than others, the completed story was both visually and narratively entertaining. My only hope is that the movie is able to reach the bar that’s been set.

“Krampus: Shadow of Saint Nicholas” hit comic store shelves today. You can pick it up wherever comic books are sold. I’d recommend you do, Krampus is watching.