Bendis To Leave Marvel For DC

By Cassidy Ward on November 7, 2017 in Comics News

Brian Michael Bendis is a name almost synonymous with Marvel Comics. If you spend any time looking at the modern revival of the medium, you’ll find Bendis’ fingerprints all over it. The five-time Eisner winner was instrumental in crafting Marvel’s Ultimate Universe and has penned some of the most well-known story arcs of the modern age including Secret War, House of M, and Age of Ultron, just to name a few.

So, news today of Bendis leaving Marvel for their primary competitor, DC, feels like something from the pages of one of his own books. The fabric of reality has ripped, a portal appears, and when everything seals closed again, nothing is the same. 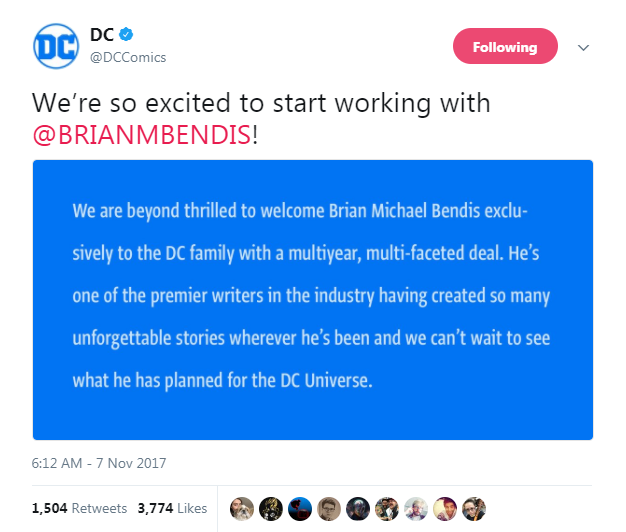 The announcement was made by DC on Twitter, and states not only is Bendis heading for the hallowed Hall of Justice to hang with the likes of the Man of Steel and Dark Knight, but his contract with DC is exclusive, meaning his time at Marvel is coming to an end.

Bendis later retweeted the announcement, confirming it is real and not some nefarious plot by the Anti-Monitor. There’s no official word yet as to when Bendis will leave Marvel for good or what titles he’ll be working at DC. Only time will tell. 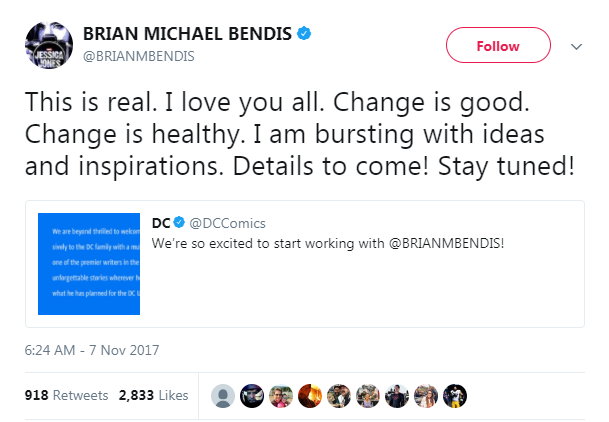 It’s certain though, no matter what happens, that Bendis has left his mark on the Marvel universe and no world shattering event will change that. We wish him luck in his future endeavors and, like DC, can’t wait to see what he can do with a fresh slate of characters.