In 2013 Josiah Bancroft made the choice to self-published Senlin Ascends. As it happens to many indie publishers, the book failed to make any immediate blips on the radar. Bancroft took this in stride and promoted himself by going from convention to convention with a small stack of his books trying to sell to readers in person. His goal was to sell 500 books. Bancroft decided to load up his literary life by playing on the hardest mode possible when it comes to selling a book, and after a time he started feeling dispirited about the whole venture. He entered Senlin Ascends into a U.K. Self Published Fantasy Blog-Off run by author Mark Lawrence. Lawrence eventually read Senlin Ascends and loved it. Josiah was introduced to Mark’s agent who got notable forums on the likes of Goodreads and Reddit to look at the novel and then as the biz calls it, ‘the hype-train’ left the station.

Senlin Ascends is a marvelous first book, with an unlikely hero who is all too easy to root for.  Thomas Senlin, school headmaster of a tiny fishing village is off on his honeymoon to visit the mysterious world wonder, the Tower of Babel. No one knows how tall the Tower truly is, and people from all over the world spend their life savings to see it and explore the many levels of its expanse. Senlin and his wife, Marya, once a former student, then his teaching assistant, took the train to the bustling epicenter of constantly changing markets and bustling passengers all coming together in the shifting shadows of the tower, reaching into the sky disappearing in the clouds. “The very seat of civilization” itself, as Senlin has taught so many of his students in so many of his lectures on the Tower of Babel.

Things fall apart for the newlyweds in the markets immediately. Senlin loses track of his wife while she’s browsing a clothing bazaar, and then Senlin is promptly robbed of all their belongings while his back is turned for an instant. In a panic, Senlin waits for Marya to reappear where he lost her, and as the hours tick by and with no sign of her showing he wanders around the dangerous markets with no success. Once in the tower, the hours of search turn into days, and days turn into weeks once Senlin gets out of the towers Basement. 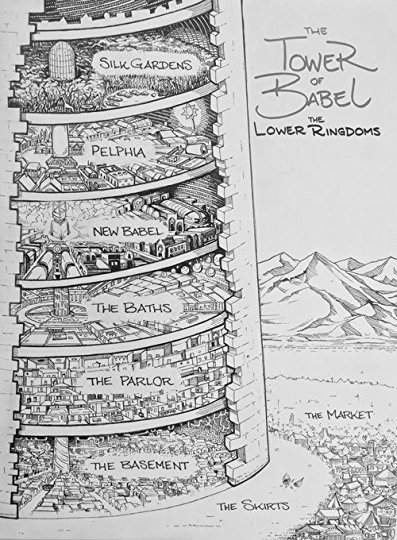 The massive ringdoms of the Tower of Babel are each self-contained by their own governance. On the lowest level, The Basement, Senlin found himself on massive mechanisms that gave patrons a show, a ride, and best of all, free beer. A man who Senlin caught red-handed selling his stolen items gave Senlin the tip that the beer was safer to drink than the water in the basement and also gave Senlin very trusted advice to not trust anyone in the tower. After a time he made his way up to the second floor, The Parlor, and the barbarism of the tower truly revealed itself. Each new day seemed to chip away what knowledge Senlin once so assuredly knew about the Tower, and that his guidebook seemed to be filled with lies. This was a place as uncivilized, rowdy, dangerous, and brutal as a war zone. Quick wits and the keen willpower to find Mayra are the only things that keep Senlin moving forward above ground, un-maimed.

One part steampunk, a dash of Bioshock, with a little bit of the Hobbit and a whole lot of excitement spills over the pages as we encounter new and wondrous delights in Bancroft’s writing. We see the wonder from Senlin’s point of view as he looks at flying ships for the first time. The danger of the tower near the markets and wrecked bodies as massive pieces of debris fall unseen through the layers of clouds onto unsuspecting shoppers. Monsters neither dead nor alive strengthened by injections of a glowing red liquid into their body, tear the heads off of those who can’t pay their debt. Others are forced into bent back slavery, stripped of clothing and shaved bald on the spot when their coffers are emptied and their debts are due.

Bancroft crafted this story with much more going on in the peripheral and background than it originally seems. The tower itself has secrets. We find out that the first three levels of the tower are tourist traps, meant to keep patrons in them for as long as possible, draining their accounts in the process. The upper levels of the tower seem to be run by some kind of nobility. A richer class who have their own ringdoms of the tower and seem to be able to do whatever they please, including kidnapping unsuspecting women. Once Senlin realizes that one of these powerful houses is the best lead to finding his wife, Senlin cuts all ties with the school headmaster and becomes something he wouldn’t recognize in the mirror.

The worldbuilding is a delight, the character development is charming and the writing is top notch. Bancroft wrote Senlin Ascends with sequels in mind and thankfully so. Rumor has it we’ll get a book about what Marya has been up to while Senlin has been looking for her, but until then I can’t wait to see what kind of adventures the headmaster finds himself in next.