By Williesha Morris on January 10, 2013 in News Video Games 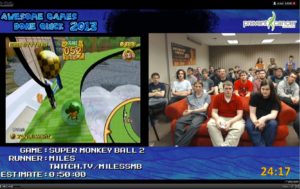 Bleary-eyed and yawning, you check the clock: 2:30 a.m. It feels like only a few minutes have passed since you started playing. Sure, sleep is important, but you just have to get past one more checkpoint.

But for the gamers at Speed Demos Archive (SDA) and GameToAid, it’s more than just bragging rights or a new high score that’s at stake. There are thousands watching. And money to be gained. But it’s not what you think: these gamers are running for charity.

And they don’t even have to get off the couch.

SDA is currently in the middle of their seventh “Awesome Games Done Quick” marathon in the Washington, DC area. They are running 115 games this week, and it ends Saturday. The runs can be viewed live on streaming web video. In the past 3 years SDA has raised more than $400,000, including over $140,000 in the last several days.

GameToAid, an Australian-based site, is doing an Apocalyptathon starting tomorrow, January 10th. They will be doing a marathon of apocalypse-type games for the charity Free the Children, which helps impoverished children around the world. They raised $265 before the marathon even began.

Yes, you read that right. Thousands of gamers have given close to a half-million dollars just to watch others play games. It’s wonderful and mind-blowing all at once.

Viewers can give as much or as little as they want via PayPal (GameToAid’s entry system would like a minimum of $5) while watching gamers play through classic and new games. SDA’s goal is to get through them as quickly and successfully as possible. They are even offering prize giveaways for donations. Both groups’ grand prize is a Nintendo WiiU.

No Better Reason To Game

SDA, which verifies game runs by archiving user-uploaded videos, has more than 700 games archived and thousands of registered users. Its popularity means increased funding goals for each marathon.

Their original goal for their first marathon in 2010 was $5,000 to CARE, a charity that combats poverty.

“When I set that goal, a lot of people thought it was too high,” said Mike Uyama, one of SDA’s founders, before their 2011 marathon. “It was our first marathon, and no one really knew how popular it would be. We had a lot of technical problems from the start. Basically we had to start 3 hours later.”

They doubled that goal and then some: $11,000 in three days.  They have also done runs for other charities, particularly the Prevent Cancer Foundation, the current marathon’s charity of choice.

“A lot of people wanted to do cancer research because helping out millions of people with a disease that effects pretty much everyone in some way or another would be a much better cause,” Ayuma said. Last year’s donations went towards a research grant for preventing stomach cancer, one of the most lethal forms of the disease.

Who knew button-mashing could be such an incredibly fast way to raise dough?

Note: As of publication, SDA nor GameToAid did not give further comment on their current marathons. Duh. They are too busy gaming!

Are you aware of a geeky way folks are giving back to their community? What do you think of these marathons? Sound off below!