On March 10, 1997, an upstart tv netlet called The WB aired “Welcome to the Hellmouth” and “The Harvest”– the first two episodes of the tv series Buffy the Vampire Slayer.

For me, Buffy came at the perfect time in my life. (Cue Britney Spears “Not a Girl, Not Yet a Woman. . .) It probably helped that I was in high school and transitioning to college at roughly the same time Buffy was, so the show really connected with me. Sure, I had seen the original movie and thought it was silly, but forgettable. Apart from Paul Ruebens’ overwrought death scene, the only thing of value I thought came from it was the soundtrack, which I owned because it had a great song by Toad the Wet Sprocket. . . more on the soundtrack in a minute.

But a tv show? Are you kidding me? Why make a tv show of that silly movie?

Foolish mortal. I had no idea who Joss Whedon was or how this would suddenly become the highlight of my week. Or that in a weird trick of irony, on subsequent March 10ths in 2012 and 2013 (yes, the SAME DAY– I checked the calendar– thanks Facebook Memories!) I would see Whedon’s Cabin in the Woods and Much Ado About Nothing at SXSW.

But by 1999, Tuesday nights became sacred and I would plan social activities around making sure I could be home to watch Buffy (and then Angel). Ahhh, life before DVR and Hulu. . .

And as I mentioned in my binge-watch review of Angel Season 2, Buffy/Angel was something my girlfriend-then fiance-then wife bonded over and became our favorite shows to watch.

One of the things I find most exceptional about Buffy is its strong feminist messages. When I first saw “Welcome to the Hellmouth,” I was aware of feminism and committed to equality and all that, but I never viewed any of the tv shows I watched as explicit social commentary. Seinfeld was a show about nothing, and The Simpsons while broadly satirical never made me think about the depiction of women and girls on television as being an issue.

I think the internet helped. With fans suddenly able to connect to one another instantly, I found myself on message boards and fan pages. . . and people were talking about feminism? I read and listened and contemplated, and realized there were so many other layers going on besides just punchy-stabby-slay-slay-slay and that fun, snarky dialogue:

In retrospect, it was really evident from the beginning. Season 1’s episode “The Pack” where male Sunnydale High students are possessed by hyena spirits? A little on the nose. But it was important, nonetheless, and helped inspire at least me to be more conscious about the implications of the media I’m consuming. Countless conversations with friends and colleagues in the last two decades let me know I’m not the only one.

But then Buffy could just be silly and fun, too. Case in point: “The Zeppo,” Episode 3.13. I’m a sucker for a good Xander-episode, and this is the Xanderiest episode of them all. The title is a reference to the Marx Brothers, and the fact that each of them has an individual schtick and piece of their group, except for Zeppo. Buffy slays, Angel is a vampire, Willow can do witchcraft. . . Xander is the Zeppo. (Perfect stand-in for an insecure otherwise unremarkable white guy trying to find his place in the world like me, right?)

So, while an apocalypse is about to open the Hellmouth, Xander searches for meaning. He decides he’s going to be the “cool car guy,” and then falls in with some guys at school who want to raise the dead and blow up the school.

There’s a lot of humor in this episode, especially when the series meta-pokes fun at itself with Angel and Buffy telling each other how much they want to be together, but they can’t be together. Oh, and also Xander gets used sexually by Faith. And there’s a great musical cue that keeps following Xander around that sounds a little bit like a spookier “Eleanor Rigby.”

On the complete opposite end of the serious scale is “The Body.” You can’t talk about Season 5 and not talk about this episode. Buffy and her friends are surrounded by death, and yet it has never hit so close to home. And the culprit is not vampires, or robots, or demons, or even supreme beings from another dimension. The problem with this is it feels almost voyeuristic. This is so hard to watch. We shouldn’t be invading these intense, private moments.

As a piece of art, as an episode of television, what stands out is Whedon’s script and direction. Every member of the group processes the loss differently. And Whedon shoots it so interestingly, with shots that resemble seeing things through Buffy’s eyes: staring at the phone as it goes in and out of focus, looking only at the paramedic’s chest instead of his face. We see, from inside Dawn’s classroom, as two sisters, two of most powerful beings in the universe, the Slayer and the Key, deal with this situation beyond both of their control.

And we hear nothing. In a show known for its soundtrack, this episode has no music. We follow Xander, and there is silence. Willow freaks out because she can’t decide on the right shirt. And then there’s Anya. 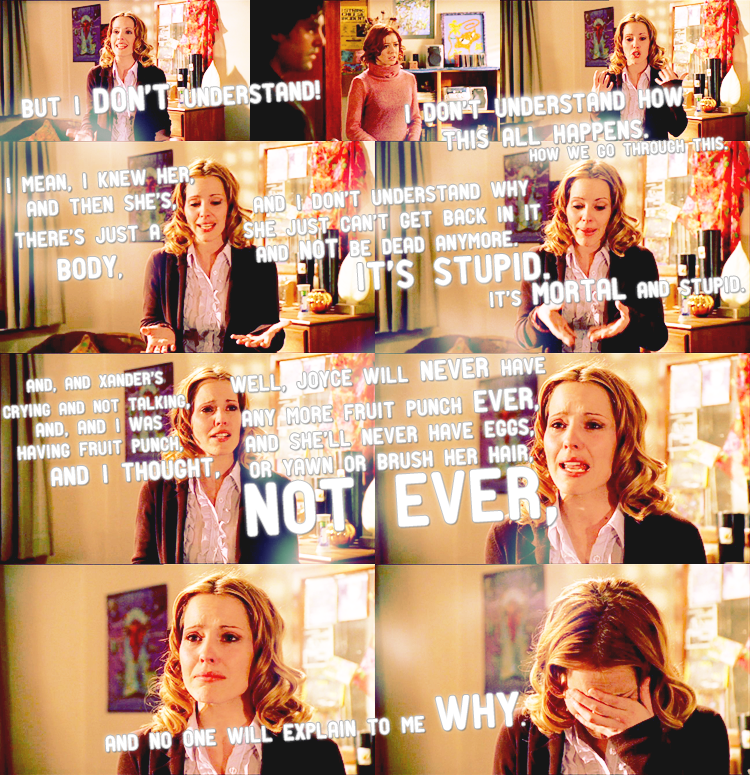 Who knew television could be this good? Joss Whedon did.

Let’s talk about that soundtrack, too. Buffy had really good music– a hallmark of the WB shows at the time. But the tv soundtrack released along with Season 3 is the pinnacle of tv show soundtracks. Not only does it include the re-recorded theme song, but some excellent music from across genres. “Temptation Waits” is an amazing song by Garbage. “It Doesn’t Matter” by Allison Krauss, “Lucky” by Bif Naked, and the cover of “Wild Horses” by The Sundays are a trio of songs that basically sum up so much of the heartbreak and sorrow of the Buffy-Angel relationship.

There’s far too much to go over and say about Buffy. If you’re interested in some of our other coverage, feel free to read below. Or, even better, leave your favorite Buffy episode or memory in the comments.