By Bryan Young on March 30, 2016 in Reviews Star Wars Television

This review will contain spoilers.

“I’ve been waiting a long time for this moment, my little green friend.” -Sheev Palpatine, “Revenge of the Sith.”

That’s the line that has been repeating in my head ever since I knew these episodes were coming. “Twilight of the Apprentice” is the culmination of Season 2 of “Star Wars Rebels” and it delivers on the promises of the season premiere in a big way. Kanan, Ezra, and Ahsoka make their way to Malachor after being given that mysterious task by Master Yoda.

What they would find there was a mystery to them, but we all had our own suspicions.

The story here isn’t so much the cause and effect of what the characters go through here in the episode, this is the culmination of a relationship that we’ve been watching build since the very first time we saw Ahsoka Tano on screen in 2008. We watched her relationship with her master, Anakin Skywalker, become the stuff of legend. Since the beginning of this season, we’ve watched her struggle with the truth that Darth Vader is Anakin Skywalker. We’re confident she knows somewhere deep inside of her, but maybe she doesn’t quite believe it.

But before that conflict can come together, a lot of other things need to happen and Dave Filoni builds all of this in a careful way that gives us some of the best “Star Wars” to come out all year. In fact, I’d stack these two episodes up against “The Force Awakens” or any other “Star Wars” film any day of the week.

I’ve watched it about a half a dozen times by now, and not once has it lost its potency, and, like any other great “Star Wars” story, it’s so dense and commands that many rewatches. There are things I didn’t pick up structurally that they were doing until the third or fourth time, making me realize that Dave Filoni really is the true heir to George Lucas as far as storytelling in the “Star Wars” universe is concerned.

I wrote this piece about “Lord of the Rings” for StarWars.com and quoted Filoni and I think he knew even then what was in store for us in this finale episode.

At New York Comic-Con last year, Star Wars Rebels executive producer Dave Filoni says of Ahsoka: “She serves the story, because you can’t just bring Darth Vader into this crew. Because he’d kill them. They need a Gandalf. [Ahsoka] shows up when necessary. She’s dealing with bigger, darker problems.”

What Filoni didn’t tell us then was that Malachor in “Twilight of the Apprentice” would be a combination of Gollum’s home under the Misty Mountains and the mines of Moria. We’re brought underground, into the dark, into the lower depths of Dante’s inferno. Why are we here? The characters don’t quite know, only that they’re looking for knowledge.

They find an Inquisitor there, a new one we haven’t met before (credited as The Eighth Brother and a Terellian Jango Jumper). In their conflict with him, Ezra is separated from the group, much like Bilbo from the dwarves. The Gollum character here, though, is Darth Maul, offering riddles in the dark. Maul is a perfect blend of Yoda and Palpatine here (particularly during his Darth Plagueis the speech), luring Ezra into trusting him. And, let’s be honest, we trust him, too. Of course he hates the Empire and the Sith as much as the Jedi. Sam Witwer as this Gollum-like iteration of Maul has never been more compelling in the part. He’s infused it with so much we know and so much we hope to know.

For their part of the story, the rest plays out like an Indiana Jones film, particularly “Indiana Jones and the Last Crusade.” They have to find a Sith holocron in a temple and have to pass tests very much like the leap from the lion’s head. The entire temple is indicative of Sith construction. The tests are physical and emotional challenges, draining and lethal. And every apparatus plays into the rule of two.

The Sith holocron they’re after is very soon representative of the ring of power: Ezra and Maul both treat it as precious.

Ahsoka and Kanan, with the help of Chopper, subdue the new Inquisitor, but he’s rescued by his colleagues, the Seventh Sister and Fifth Brother. The fight breaks out and Ahsoka and Kanan might be outmatched, if not for Maul.

It’s an interesting reversal from his role in “The Phantom Menace,” changing him from the destroyer to the cavalry. Ahsoka, who he affectionately refers to as Lady Tano, is naturally suspicious, as is Kanan, but with Inquisitors on the attack, they don’t have much of a choice. Maul approaches this with an infectious glee, (“What fun! What…fun!”) and it’s a fight worth watching.

But this was but the prelude to the main event. These are the cave trolls before the Balrog arrives.

This next portion of the episode, where they lethally dispatch each of the remaining Inquisitors is thrilling. Maul tricks Ezra into activating the temple with the holocron, and, once the Inquisitors are dead, he turns on Kanan and Ahsoka, claiming Ezra as his new apprentice. He’s once again trying to play Palpatine’s games, but springing the traps too soon.

He blinds Kanan, which is first scar we see our characters bear that will affect them significantly going forward. And this is imagery I love. Kanan will need to tune himself even further into the Force. The film nerd in me loves this as well, seeing as we’ll get many references to “Zatoichi: The Blind Swordsman.”

Kanan, even blinded, proves that trust in the Force is enough to dispatch Maul, but Ezra is left with the Sith holocron and Vader attacking him. 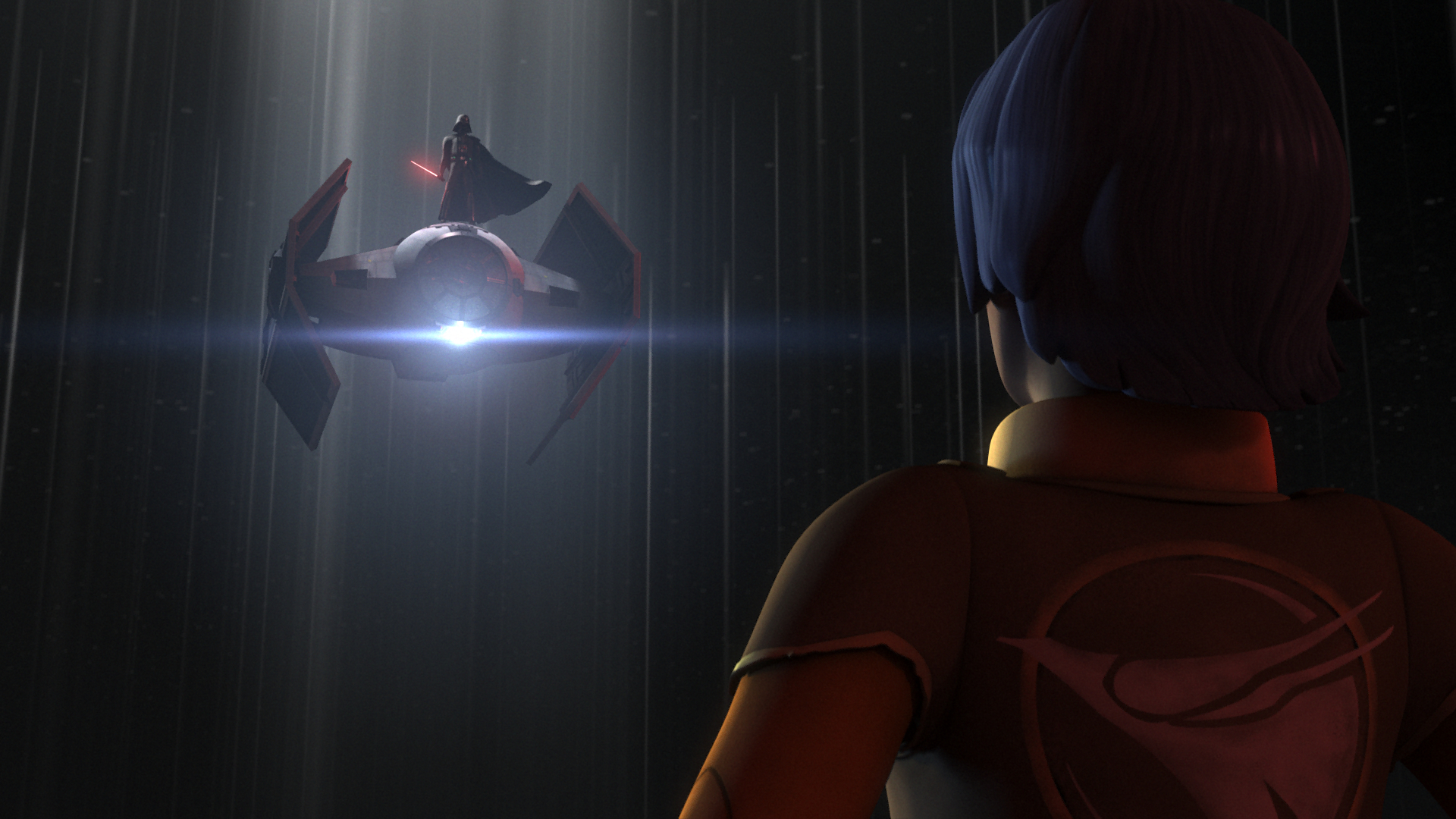 At this point, we know what we’re getting into.

Vader’s confrontation with his former padawan.

The staging of the confrontation between Anakin and Ahsoka mirrors (in that “Star Wars” Ring theory sort of way) is identical to the scenes at the base of the Jedi temple when Ahsoka is leaving the order, and Anakin, behind. Their conversation echoes moments from “The Force Awakens,” too. “Anakin Skywalker was weak, I destroyed him,” sounds an awful lot like, “He was weak and foolish, so I destroyed him.”

For my money, though, this confrontation is more important and more emotional. I’m more invested in the Anakin/Ahsoka relationship than I am the Ben/Han Solo one. Part of that is the fact that Ahsoka has been a beloved character for me for almost 8 years, Anakin/Vader, my whole life. That isn’t to say that Ben Solo can’t get to that point for me, he just hasn’t earned it as much as Ahsoka has yet.

The scene plays out against Kevin Kiner’s score that mixes the best of Ahsoka’s theme with the most striking themes from Vader’s battle with Luke on Bespin. Ezra, clutching an arm, even tries crawling away from Vader just like Luke on the weather vane. It’s beautiful. Haunting. Perfect.

And Ahsoka is the only person who can be a match for this Balrog, truly the Gandalf of the situation.

But the most iconic image of the episode is going to be Vader’s mask split open by Ahsoka’s lightsaber and Anakin Skywalker’s Sith-eyes peer out, looking at her directly. The modulated mix of his voice between Matt Lanter and James Earl Jones will haunt me forever, especially as he ignites his saber and says, “You will die…”

The sound design is flawless. That pained cry of Vader’s as he hits the ground when Ahsoka hits him, lifted right from “Return of the Jedi” is perfect. And so is the emotion. Especially when Ahoka references the moments of Eowyn in her fight with the Witch King of Angmar. Instead of being no man, though, she is no Jedi. It’s stunning.

And is there a more heartbreaking moment than the temple collapsing and Ahsoka shoving a screaming Ezra away, so that she might confront her destiny on her own, leaving the fellowship of Rebels to live to fight another day?

The rest of the episode plays out silently over another chilling piece of Kevin Kiner music, offering us a look at just how things have changed for the future. Kanan: blinded. Vader, damaged, but surviving. Maul, once more roaming the galaxy. Ezra, teetering to the dark side.

I’m not sure. There are going to be many theories. Following the logic of the “Lord of the Rings” comparisons, will she be coming back in a “Gandalf the White” sort of situation? Is she dead, “fallen into shadow?”

Whatever the answer, I feel like the clue is in the owl creature. That was the same creature that ended the last episode, a portent of the ominous tone. What is it trying to tell us?

And that’s what I love about “Star Wars.” We can debate about what this does or doesn’t mean until we know for sure and the answer to our questions blows us away.

The bigger question, though, is why did Yoda send them there in the first place? Harder to answer.

Meditiate on this, I will.

I can see a few things people might quibble about, namely the helicopter lightsabers, but this is a Sith temple and between the Force and sabers spinning that fast, I’ll buy it.

For the stunning animation, perfect build-up and climax, satisfying character moments, and emotional roller coaster, this double-length episode is a perfect 10 out of 10. Technically, it’s flawless. The lighting, the staging, the lightsaber effects and glows, the sparks and explosions. The sound design, the music, the story, everything works together to create a perfect crescendo.

An interesting side-point about the Sith holocron: I asked Dave Filoni at the premiere screening about the voice of the holocron. It was Nika Futterman, though not as Ventress. It was a new character we’ve not been introduced to and he assured me that he had worked out the history of the temple, offering many more storytelling opportunities.