By Bryan Young on January 2, 2010 in News Star Wars Television 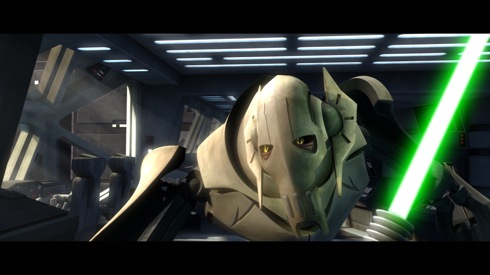 The first day of the new year brought us two new episodes of Clone Wars, both featuring General Grievous. The episodes interconnected, but each had a different feel.

The first episode, “Grievous Intrigue” detailed the exploits of Anakin and Obi-wan as they tried to split up and rescue Master Eeth Koth from the clutches of General Grievous and do their best to take Grievous into custody. By splitting their forces to save Master Eeth Koth instead of fighting Grievous with a full frontal assault, Grievous is allowed to escape to the nearby planet of Salucemai which brings us to the more interesting of the two episodes, “The Deserter.”

While Anakin officiates over the space battle, Obi-wan descends to the planet’s surface to capture Grievous with Captain Rex and Commander Cody in tow. During the battle, Rex is wounded and taken to a nearby farm to recuperate while the rest of his team is ordered back on the hunt for Grievous. By chance, the farm he’s left on is owned and operated by a clone who deserted from the Republic army shortly after the battle of Geonosis.

The first episode is almost all action with a bit of the philosophical push/pull from the Jedi that we’ve come to expect during this conflict. Eeth Koth, after being saved, scolds Anakin and Obi-Wan for saving him since they had to split up their forces and reduce their chance of capturing Grievous and it’s an interesting point. What is more benevolent? Rescue a captured comrade or leave him to die so that you can end the larger conflict more quickly? The Jedi seem to have a hard time struggling with those answers and it’s been fun to watch them grapple with them.

Having said that, this first episode was almost all action (and preposterously well animated action at that) and was very fun to watch. I’m in love with the Commando droids and am almost sad that I didn’t get to see any of them in one of the films proper.

The second episode was almost the opposite, though. It had much more morality tale than action to it, though I think the action was better in some ways than the last episode. Rex and the clone deserter have a great conversation about loyalty and individuality and whether family or duty are more important. Soon, the deserters’ half-Twi’lek children find an escape pod full of Commando droids and a battle ensues for the safety of the family. Rex sees what’s important here and decides to help the deserter defend his farm and his family.

Though I love lightsaber duels (particularly with General Grievous) I felt like this fight, which was very reminiscent visually of the final showdown in L.A. Confidential, was by far the most interesting of this pair of episodes. There was more at stake here. I knew that Obi-Wan wasn’t going to be able to disable Grievous and if he did capture him, it would be short lived. But I have no idea about this Clone and what is going to happen to him or his family and the philosophical debate behind the episode made it feel like there was more at stake here.

That and the commando droids are radical.

I also want to point out that this is another great episode that’s held up on the back of Dee Bradley Baker. As the voice of all the clones, he played a lot of parts in this episode and they were all different. Though the differences were small, Rex and the Deserter sounded very much alike and I think this was on purpose. The Deserter says a lot that he’s as close to Rex as any other life-form can be and he points things out like he’s in Rex’s head and so I thought that it was a very deliberate choice to have them be so similar in the voice with only the barest of differences. It made Dee Bradley Baker’s job a lot harder, but I think the effect was worth it.

Overall, I think this was a great pair of episodes, though not the best in the season to date. There was solid action, great philosophical questions and ever-improving animation.

To catch up on Season 1, you can order The Clone Wars: The Complete Season One at Amazon by clicking the link.

For other Clone Wars news and reviews of previous episodes, click this link.