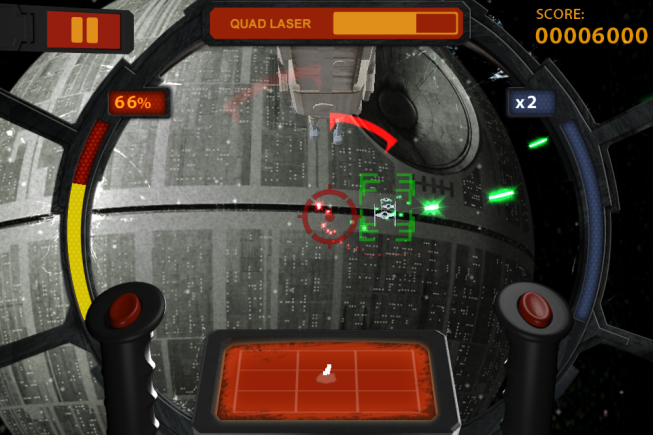 Star Wars Arcade: Falcon Gunner is a terrific first-person space-shooter that has just hit the Apple App Store for iPhone. If you have ever wished you could blast away incoming TIE Fighters (and eventually the Death Star) anywhere and any time you please, then this game is certainly for you. The objective is simple: defeat wave after wave of oncoming TIE’s from the cockpit of the Millenium Falcon.

The controls are simple. Rotate your iPhone left, right, up and down to move the Falcon; use your left thumb-stick to aim your blaster, hold down the right thumb to blast away (but keep in mind, your gun can over heat). While the controls are simple and responsive, it will take a few waves to get used to them, but once you do, you’ll be blowing TIE Fighters out of the sky as well – if not better – than Han or Luke. As you play through the game you earn credits that you can use to upgrade the Millenium Falcon for better armor, stronger, faster blasters, and add missiles and tractor beams to your arsenal to make disposing of the enemy even better. If you don’t want to simply play the game to earn credits, you can upgrade any of these options via in-app purchases for $.99. But honestly, save yourself the couple bucks and  just play the game, you’ll earn enough credits to upgrade the Falcon in due time.

One of the big and fun aspects of Falcon Gunner though is the Augmented Reality version of the game. Simply turn on that function on the homescreen and the space background is replaced by your actual surroundings via the iPhone’s camera. Take out TIE Fighters as they invade your backyard, place of work, or even just your living room. I actually found the controls in this mode to be a bit more user-friendly. Instead of tilting the iPhone to aim, you literally just point your iPhone where the radar tells you the TIE’s are coming from and fire away; word to the wise you, you’ll need to be standing to play this mode as it utilizes a full 360 degree environment – so if they are flanking you from behind you are going to have to turn yourself around to do battle. This is probably one of the more fun augmented reality games I have ever picked up for the iPhone – it’s pretty fun watching TIE Fighters fly over the roof of your house trying to kill you. You can also utilize the augmented reality setting you let off some steam by pretending to take shots at your nagging wife/girlfriend/boyfriend/husband – but I’ve found that a distracted gunner is a dead gunner, so it’s best to stay focused on the mission at hand and take out those oncoming enemy Fighters. 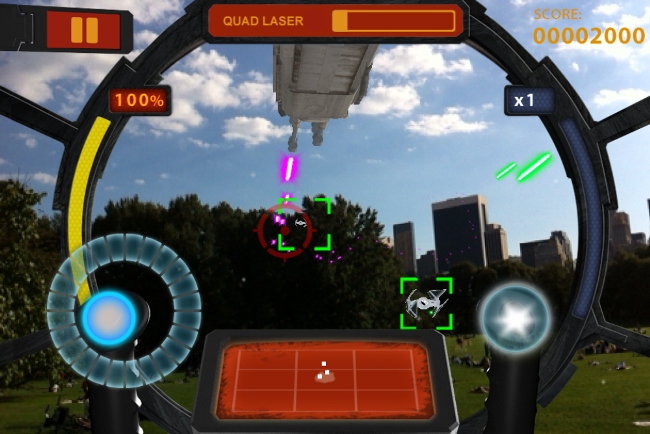 Star Wars Arcade: Falcon Gunner is bit more expensive than your standard game in the ap store, and is currently gonig to set you back $4.99. Honestly, I have rarely spent more than $.99 on any app for my iPhone, but I felt like I had the five bucks to spend on this game, and I haven’t felt ripped off in the slightest. iPhone users know though, wait long enough and almost every app goes on sale in the app store eventually. Even at it’s current price though, Falcon Gunner would make a fine edition to any iPhone users game library, whether you are a fan of just a fun first-person space-shooter game, or someone longing to channel that inner Han Solo and do some work against the Empire.