It’s not hyperbole to say that The Lord of the Rings is one of the best and most influential books of the 20th Century. Bits and pieces of the world that sprang to life from the imagination of J. R. R. Tolkien can be seen in almost every fantasy project since and even in standard fiction or sci-fi. And while most people are familiar with Frodo, Gandalf and the One Ring, fewer are probably aware of the story of the man himself and what took place in his life that inspired him to write his epic. Tolkien attempts to fill in the gaps of what we may not have known, and while it is decently well made, it doesn’t quite hold the audience’s interest from beginning to end.

Those hoping this is the story about how The Lord of the Rings was written are going to be letdown as this is about as straightforward as a biopic gets. Starting with the frontlines of WWI, we flashback to him and his brother losing their mother and being placed in the care of a kindly society woman in London. With the help of the church, Tolkien is placed in King Edward’s, a prestigious secondary school where he is at first the outcast before forming a lifelong bond (a fellowship, if you will) with a small group of classmates. They continue on together to Oxford where Tolkien (Nicholas Hoult) loses his scholarship due to some drunken shenanigans only to regain it when his mastery and creation of language impresses a tenured professor. The specter of WWI looms large, however, and the young men are soon thrust into hell itself, and only two survive the horrors of the frontlines. Scarred from his experiences, he manages to live on and create a happy life with his wife Edith (Lily Collins) and their children before deciding to put his language skills to use and create a story that we now know as The Hobbit. 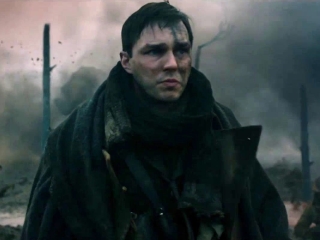 Tolkien is a film that is definitely less than the sum of its parts. Considering all that the man went through, this biography feels hollow and cold. And what’s even more frustrating is that everything around it is genuinely good. Hoult and Collins are fantastic in their roles as are his classmates, and the cinematography of the war scenes is compelling and chilling. The fever dream that plays out before his eyes watching fellow soldiers being cut down by ringwraiths and orcs instead of bullets and grenades is pure beauty to behold and obviously where a lot of the budget was spent. But it doesn’t make up for the fact that none of it aside from those moments are that interesting which is an absolute shame, because this is about the man that changed the face of literature. It’s just a wasted opportunity that means people will walk out shrugging wondering why it was worth the fuss to begin with.

This is probably coming across harsher than intended, because it’s not a bad film, but it is almost excruciating to see the missed potential of what Tolkien could and should have been. Learning that The Lord of the Rings was inspired by PTSD and what played out in his eyes during the War are the best parts, and those shining moments make the rest of it seem that much dull by comparison. Even hardcore Tolkien fans such as myself are going to be hard-pressed to enjoy it, and ones barely familiar with him and his life might as well sit this one out. But in all honesty, everyone should just set aside 50 hours and rewatch the extended cuts of the movie trilogy. It’s more interesting and doesn’t feel as drawn out.