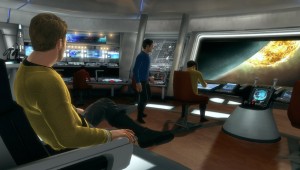 The bridge of the Enterprise is just one of many areas of the starship players can explore in the upcoming Star Trek: The Video Game.

Star Trek video game fans have a little more than two months before they’ll be able to virtually explore the U.S.S. Enterprise in more detail than ever before, according to the executive producer of the forthcoming Star Trek: The Video Game.

“One of the great joys of video games is the opportunity to take audiences to places that are only hinted at in traditional film and TV projects,” said Brian Miller, senior vice-president of Paramount Pictures and the game’s executive producer. “Giving gamers the opportunity to explore the U.S.S. Enterprise is one of the more exciting aspects of our video game and one that we can’t wait to share with Star Trek fans and gamers worldwide.”

And while being able to virtually go through the iconic areas of James T. Kirk’s starship should prove to be a cool experience, the fact is this game will sink or swim based on how much story and action is packed into its code.

According to Miller, you will play as Kirk and Spock, doing battle against the Gorn – which is a whole lot of awesome all on its own. The reptilian race is iconic in itself and is a nice bone for the fans to chew on. The Gorn were the enemy first introduced in the classic 1967 Star Trek TV episode Arena.

As you fight your way through the story, gamers will venture deep into the ship, exploring locations like the bridge, transporter room and engine room, as well as turbolift shafts, the observation lounge, engineering decks and officer’s quarters.

“The Enterprise is not just a ship – she is one of the most important characters in all of Star Trek. Our goal from day one was to make sure that the Enterprise looks, feels and even sounds as true to life as anything players have ever seen,” Miller said.

A look at the trailer (see below) shows the game is a shooter and it clearly looks as if the action is being influenced by J.J. Abrams’ overhaul of the beloved sci-fi franchise. With some run-and-gun phaser action, Abrams’ attempt to inject a little more of a Star Wars sensibility into Star Trek looks to have carried over to this game, which is being published by Namco Bandai Games.

For this bot, that’s a good thing. Star Trek games have often been too laid back and boring. My personal No. 1 Trek gaming title was Star Trek: Voyager – Elite Force, a first-person shooter in which you played as a member of Capt. Janeway’s crew and did battle with the Borg. Now, I’m a shooter fan and I love nothing more than strapping on a virtual weapon and blasting baddies. But if this game can find a way to combine some great action with a deep, engaging story and immersive environments, this could be a win-win scenario for gamers and Trek fans.

Wayne Chamberlain is the co-host of the Star Wars Book Report podcast, available on iTunes, and a contributing writer with Postmedia News and Canada.com.