By James Floyd on August 21, 2014 in Comics Reviews Star Wars

So I’m sure the big question on everyone’s minds is “Who doesn’t survive the final issue of Darth Maul: Son of Dathomir?” as this was written to be the end of the character arc for Darth Maul on Star Wars: The Clone Wars. While we know several Sith Lords (and their cyborg general) need to live on for Episode III, that leaves Darth Maul and Mother Talzin and the Shadow Collective wide open on the chopping block. Fear not, as I know the answer – and am not going to spoil it. I would recommend this entire series, so go get issue #4 (DarkHorse.com profile) today! 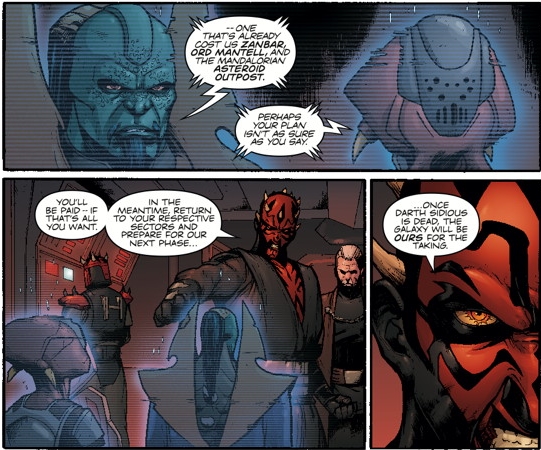 Summary: With the Jedi interupting the battle for control of the dark side, Maul has an unlikely new partner in Dooku. But as they say among the Sith, “the enemy of my enemy… is still probably my enemy.” Nope, Dooku is to be sacrificed in a ritual designed to fully bring Mother Talzin back to corporeal form. But then Grievous and Sidious stealthily arrive on Dathomir, ready to put a stop to Maul’s plan. And the battle begins… and I’m not going to say anymore.

Review: What an epic ending to this great series! This would have been one of the most awesome smackdown episodes had it been made as part of The Clone Wars. Again, kudos to Jeremy Barlow for adapting the screenplay to the comic and directing the action in this issue. The art team (pencils by Juan Frigeri, inks by Mauro Vargas, colors by Wes Szioba, and lettering by Michael Heisler) is on top form for this issue, capturing the menace of each of the characters as well as putting them into the heat of battle with lightsabers and Force lightning cranked up to eleven. I’d mention some of my favorite panels, but that would be spoiling the climax of the story. And another great cover by Chris Scalf, summing up the conflict in one masterpiece.

I wish there had been a little bit more of the wrap-up at the end, but it seems pretty clear where things stand. Darth Maul: Son of Dathomir is probably my favorite Star Wars comic of the year, and the final issue brings this tour de Force to a spectacular finish. Go get it!