By James Floyd on September 2, 2013 in Comics Reviews Star Wars

After thwarting a Sith Lord called Darth Wredd, Ania Solo and her companions get a break this time, and a chance to lick their wounds – but Darth Wredd is already up to new schemes in Legacy #6, released August 28, 2013. (DarkHorse.com profile). Are Ania and her friends ready to take on more Sith, or is risking their lives once in a big adventure enough for the gang? Spoilers ahead!

Summary: Undeterred by his recent failure to embarass the Galactic Triumvirate by broadcasting the murder of one of its Imperial Knights, Darth Wredd starts a campaign of exposing Sith infiltrating various planetary governments and killing them, including a Snivvian diplomat on Cadomai Prime. The Triumvirate’s leaders, along with Jedi Master K’Kruhk, aren’t sure what to do about this – is Darth Wredd doing their work in rooting out the Sith for them?

Meanwhile, aboard AG-37’s damaged ship, Ania Solo, Yalta Val, and Sauk contemplate their diminishing options to finding Jao Assam proper medical care when they are picked up by the Animus, one of the Empress’ Star Destroyers – the Empress wants to meet Ania Solo and give her a position at the capital! Master Val learns that he will be re-assigned to a desk job on Coruscant, though he feels he should be tracking Darth Wredd. While in the bacta tank, Jao Assam has a vision of Darth Wredd – attacking the Empress. With Imperial help, Sauk repairs AG-37, and the assassin droid gives Sauk a job as his ship’s engineer, and the pair depart – though at another port, Sauk is tempted by a fellow Mon Cal who invites him to join in the rebuilding of Dac.

Newly recovered, Assam reveals his vision to Val, who reminds them that they have their orders – Jao has likewise been assigned to Coruscant for lighy duty as he recovers. Assam shares his frustrations with Solo, and his concern that Wredd wants to restore the Sith rule of two, with Assam as an apprentice. The two agree to take their new assignments on Coruscant, and leave Darth Wredd alone – but later they both come to the same conclusion to hunt down the dangerous Sith. Hoping to steal a ship from the Animus, they are blocked by Master Val and a squad of stormtroopers. Uh-oh! 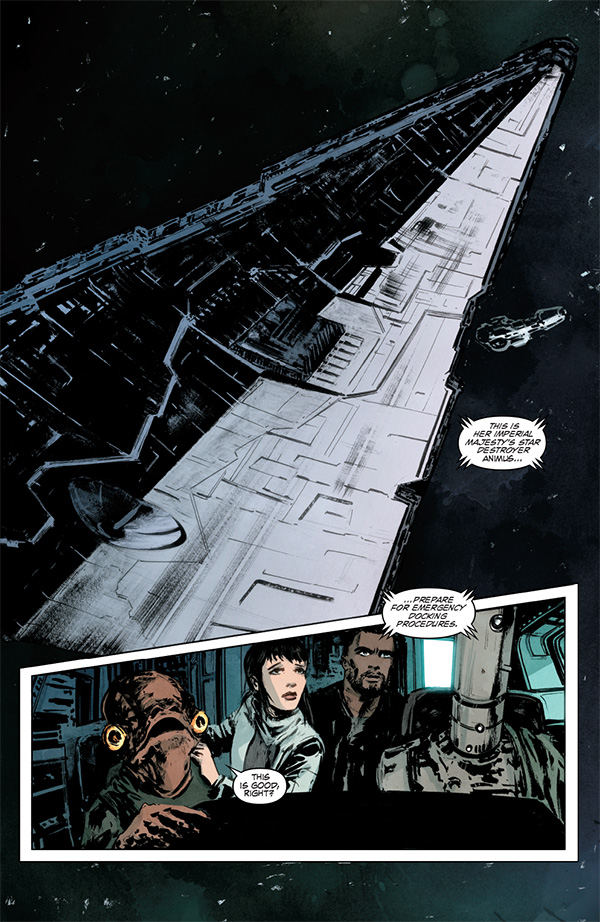 Review: Well, that’s a wrinkle. And that’s one of the ways where the Imperial Knights differ from the Jedi – they take their obedience to the state and the Fel dynasty much more seriously. But this development is enough to cause some tension in mostly a setting-the-stage issue. And the team gets broken apart – Ania is separated from her friend Sauk and her odd mentor, AG-37, by the lure of a good opportunity on Coruscant, and even Jao and Yalta find themselves on separate paths. Separate colliding paths, it seems. And Sauk is feeling the pull to go home and help rebuild his lost homeworld. Overall, splitting up the team is a new direction – while they are friends, they are not in the hero business, and they all have separate paths in life.

And what is Darth Wredd up to? Confusing the triumvirate by taking out his fellow Sith across the galaxy. It is interesting to see a galaxy that generally all know who the Sith are, and doesn’t want them – unlike the way the Sith are hidden in the movie timeframe. Corinna Bechko and Gabriel Hardman get us off to a good start while kicking off this new storyline – we really don’t know where it’s going to go from here, and that’s refreshing. And how long has it been since a Star Wars comic pulled you in enough that scenes where friends are bidding farewell have great emotional connection to the reader – these are characters worth caring about!

One of the requirements of Star Wars comics seems to be having some sort of action scene in every issue, even when the story doesn’t have much action in it. To that end, we get a few pages of Sith vs Sith duel (Snivvians with Force lightning!) at the start, and then Jao Assam doing some lightsaber practice with a remote while discussing the situation with Master Val in the middle.

This arc also starts with a shift in art – while Gabriel Hardman is still working on the scripts with Corinna Bechko, he’s taking a break from doing the artwork, and Brian Albert Thies is taking over for a while (with Rachelle Rosenberg and Michael Heisler continuing their roles on colors and lettering, respectively). Thies uses Hardman’s ink-heavy style fairly well, and catches the characters fairly close but there are some differences – Ania looks a little more dreamer-ish, and Val didn’t quite feel the same.  Plus, no stipple patterns for shading the ships – I don’t know why I don’t like dot patterns in Star Wars, but there it is. Overall, the art style flows from the same look and feel as from the first story arc, and so this is a pretty seamless artist change.

My favorite panels: the whole page where Darth Wredd charges into action against the Snivvian Sith, who returns with some Force lightning, and also the shot when the Star Drestroyer appears, and we see inside AG’s cockpit, with Ania, Val, Sauk, who says “This is good, right?”

The cover is by Livio Ramendelli and it captures the menace of Sith on Sith action well. Or is the Snivvian just adding a little charge to his drink. 😛

Overall, a neat way to start us off on a new story line.

Bonus: Also check out Station to Station, a one-shot by Corinna Bechko and Gabriel Hardman, about some folks trying to put a stop a giant interdimensional alien that has taken over Treasure Island in San Francisco Bay after some science goes amok. Sort of a modern Lovecraftian horror. (DarkHorse.com profile)