There’s some debate in the minds of pop culture consumers as to whether or not our media should be political. Some people want to watch a movie, read a book, or listen to music without having to contend with any layered messages. Others, this writer included, believe that all art is political. Every artist has an agenda, and even attempts to remove what some consider political correctness from the work, amounts to a political statement. Other consumers are happy to be confronted with narratives that question the status quo, Lab Raider is for the latter camp.

The story centers on two activists as they enter an animal testing facility and wreak havoc, destroying equipment and records. The narrative flashes back, giving us insight on the history and psyche of our main players. 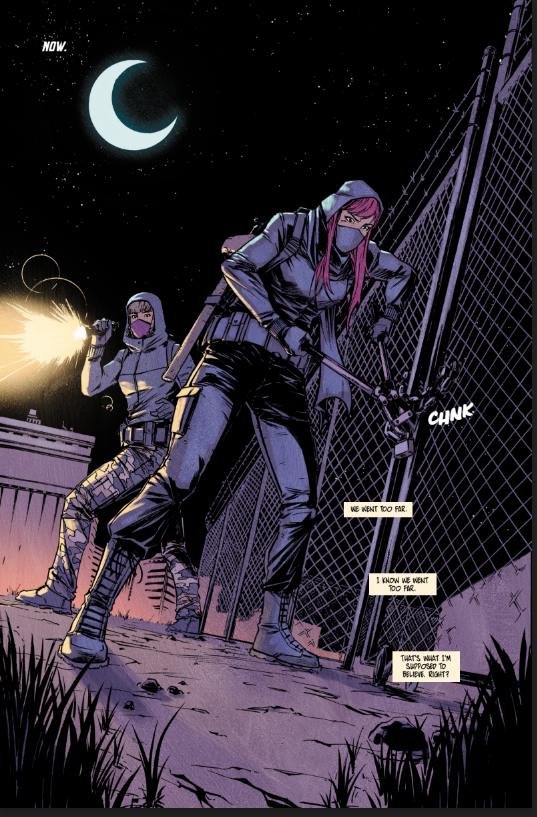 It’s clear, from the jump, that these activists are our heroes, but they are flawed. On at least one occasion, they’ve gone too far, broken the rules, and crossed into villain territory.

Miner’s writing feels real and isn’t afraid to explore the gray areas inherent in this sort of story. In so many superhero books the lines are black and white, the actions of the heroes never questioned, but the best ones take us to places which make us wonder just precisely where the line is. And though there are no superpowers present, that’s where Lab Raider lives.

And that’s the genius of this story. Miner and Creees appear acutely aware that some readers will dismiss it based on subject matter alone and take pains to let those readers in. Lab Raider knows it’s treading on controversial ground and handles it delicately while still being filled with tension. There’s an almost constant sense of foreboding throughout its pages capped off with a final reveal that ratchets the story into a new world.

By the end, you’ve left the real world and entered into something more comfortable on the shelf next to Morrison and Quitely’s We3. This shift into a genre story is another brilliant move by Miner and Creees as it removes the moral and ethical questions Lab Raider is sure to address into a realm which is entirely fictional, a place where readers will be more comfortable to consider them.

I’ve been following Miner’s work for many years and, while I’ve enjoyed everything he’s done, I suspect Lab Raider might be his best work yet.