By Quinn Rollins on August 7, 2015 in Collectibles Reviews Television

I’m a lifelong fan of “Scooby-Doo.” I’m old enough to remember the original iteration of the cartoon, which started in 1969, ran through the 1970s, and has had some version of the show on the air nearly continuously ever since. There was the Scrappy-Doo fiasco, there have been live action movies, and the most recent version, “Scooby-Doo: Mystery Incorporated” is probably the smartest and funniest version of the Meddling Kids ever made. That said, none of them would have happened if the original series hadn’t been so strong. That’s part of why I’m so happy that LEGO chose the first season of “Scooby-Doo” as inspiration for its lineup, debuting in stores August 1st.

There are five sets, ranging in price from $12.99 to $79.99. Each of them has Shaggy and Scooby-Doo, and at least one monster/ghost/guy dressed up to scare away myster-solving teenagers. Of the sets, my favorite is the Mystery Machine. I have a thing for iconic fictional cars, whether it’s the Batmobile or Doc Brown’s Time Machine, Fred Flintstone’s steamroller-style car, or the ECTO-1. The Mystery Machine is solidly in that garage-shaped pantheon. And the LEGO version is just about perfect. 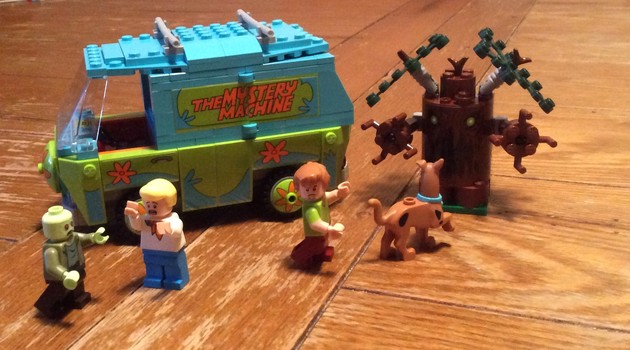 The Mystery Machine, while often called a classic VW bus, isn’t. It’s got a different shape, more angular and shorter. Hanna-Barbera probably didn’t want to pay royalties to Volkswagen, so Mystery Inc’s wheels aren’t German-made. Or…German-engineered, made in Mexico, which is what currently happens. Anyway. It’s got the spare tire mounted on the front of the van, it’s definitely got the classic hippie van vibe. LEGO has made VW buses before, but this was their first attempt at the Mystery Machine. It’s beautiful.

The colors, lime green and turquoise, are perfect. Both relatively new colors in the LEGO palette, they’re essential to get the cartoony look right, and they’ve got them. The outside is covered with stickers (it would have been better as printed pieces, but it would also probably cost $5.00 more), to give it that flowery groovy look. What impresses me most is the shape. Kind of top-heavy, with a combination of angles and curves that can be tricky when building with LEGO. It’s not just a straight-sided van; it’s…cartoony. The windshield is (I believe) a brand-new piece, and it’s perfect for the vehicle. The unique shape of the windshield opens up the front seats of the van, with enough room for driver and passenger to sit side-by-side. 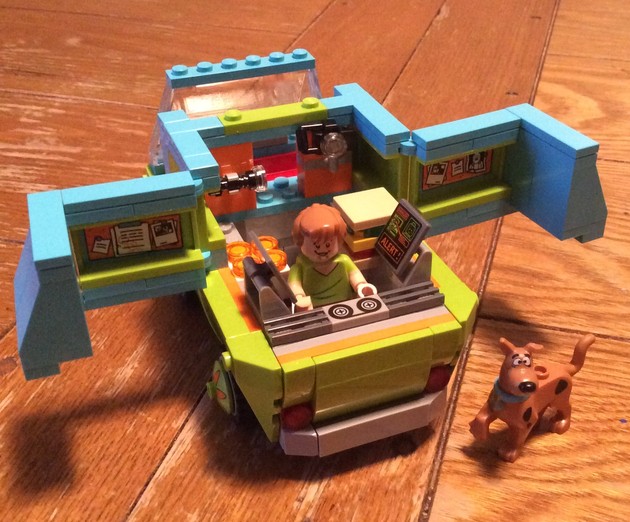 The interior is detailed, with a radio in the front, and a kitchen with stove and sink in the back. There’s also a big Scooby-and-Shaggy style sandwich on a countertop, and a tape recorder (it’s either a reel-to-reel or a VHS), radar screen, and computer terminal in the back. For crime-solvin’. There are also crime lab-style bulletin boards on either wall behind the kitchen equipment. They crammed a lot into one van, and the rear swings open and the top comes off to allow play inside. 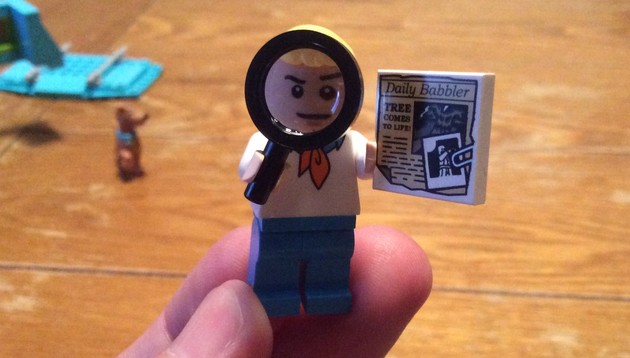 The minifigures are also damn near perfect–Fred and Shaggy both have new, unique hairpieces that are more cartoony than most current LEGO hair, but look completely on-model for the characters. They’re classic Scooby, with Fred’s orange ascot and Shaggy’s green t-shirt with short sleeves (a relatively new LEGO innovation on their minifigures). Both Fred and Shaggy have two-sided heads so they can be either happy or scared; just take off the hairpiece and turn the head around. Scooby-Doo himself is an all-new molded piece, with a turning head but otherwise solid. My son pointed out that one side of Scooby’s face is scared, the other side happy–it gives him a slightly crooked face, which is just fine. The villain that comes with this set is the zombie from the first season episode “Which Witch is Which?” He’s also got a robotic tree, which matches the headline of the newspaper that Fred’s got, “Tree Comes To Life”

So…this set is great. And for $29.99, it’s about average for a set of that size. I’m impressed with everything that’s included. The hard part for me is what’s not included–or who. And that’s Daphne Blake and Velma Dinkley. That’s right, I know their last names. Don’t be surprised. (and Shaggy’s real name is Norville Rogers, and it’s Freddy Jones)(you’re nerds too, don’t judge me) LEGO, like every toy company, is a company, and they want as many of my dollars as they can get. If you’re looking to get every Avenger, you’re buying every “Avengers” LEGO set. Every Batman villain, the same. In this case, in order to get all five members of Mystery, Inc. you’re going to have to buy the Mystery Mansion (largest set at $79.99, and the only one with Velma) (Daphne comes with both this set and the Haunted Lighthouse) and the Mystery Machine, which is the only set with Fred. What that usually means for me is that I end up with half of the Avengers, or I’m missing a few Star Wars characters. In this case, each of the five characters is so important to me that I did it. I built the Mystery Machine now, I’m saving the Mystery Mansion for Halloween. I don’t resent it, I understand why they do it, and this time…it worked. 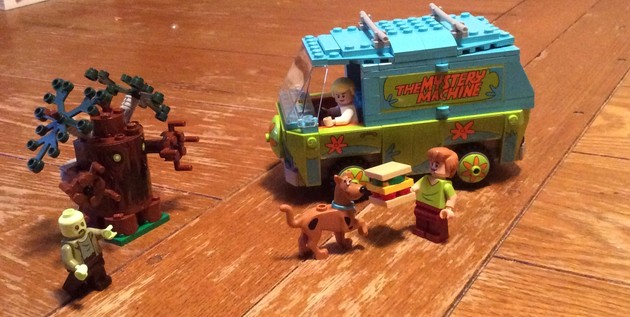 Seeing these sets fly off the shelves, and seeing both young kids and nostalgic adults going bonkers over them, I think LEGO’s got another hot property on their hands. With the impressive assortment of sets in the first series, it will be interesting to see what follows.