By Quinn Rollins on February 5, 2016 in Collectibles Reviews

This week LEGO’s crack-like addictive line of minifigures added its latest wave. Series 15 is a particularly strong grouping that includes characters from space, city, castle, and mythology themes, with new sculpted pieces galore. As with other waves, I want all sixteen of them. I’m trying to rein myself in a little though…at least as of this week. So using my best package-fondling skills (they’re blind-packaged, so you need to use skilled fingertips to figure out who’s who) I picked the seven characters I wanted most. 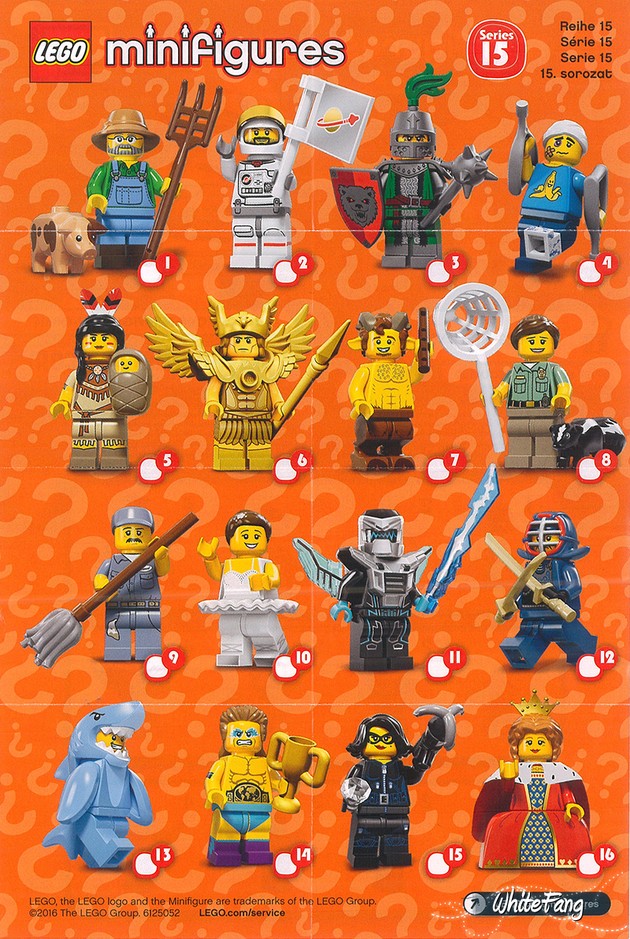 There are at least sixteen newly-sculpted pieces on the sixteen characters, like the farmer’s pig (an updated sculpt from the old one), the queen’s skirt and hairpiece, the wrestler’s mullet. But that doesn’t mean those characters have made my list. Here’s who I picked up, and why they were must-buys. Here we go, from least-important to most. 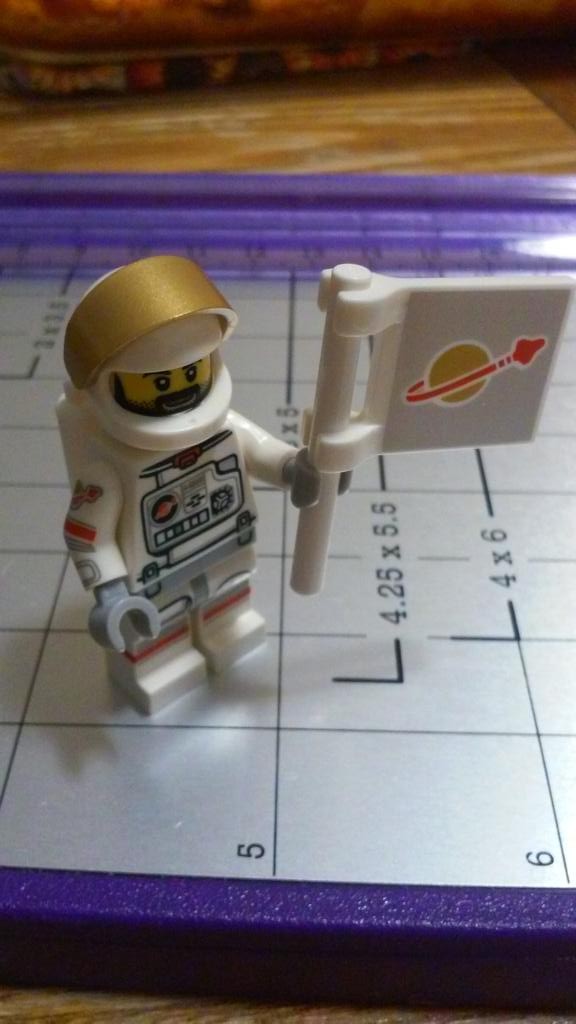 Astronaut — I’m a fan of the Classic Space era of LEGO, like Benny from the “The LEGO Movie.” That’s when I first noticed LEGO was a thing, and I still love those guys best. This astronaut is like a modernized version of those, with the classic space logo printed on the flag, his shoulders, and chest plate. This is one of the characters I’d like four or five of, just to start some kind of new space mission. Like many of these characters, he’s got printing on his arms and even the sides of his legs — something LEGO’s printing technology couldn’t do easily five years ago, but is becoming more standard. 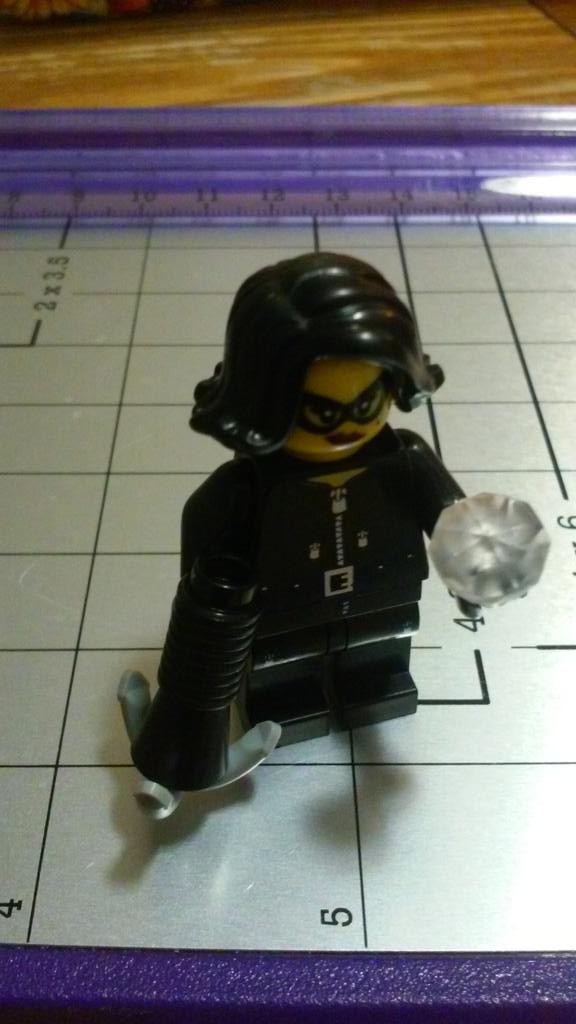 Jewel Thief — Is it weird to say you should just buy her because she’s sexy? Yeah, that’s weird. Really, she’s a classic cat burglar, with a skintight suit better than most Catwoman characters we’ve seen, with a great mask and smirk. The kicker for LEGO collectors is that hairpiece, which debuted in red on a Black Widow minifigure in the “Age of Ultron” sets, and has only made one other appearance until now. Plus diamond and grappling gun, but those are a dime a dozen. 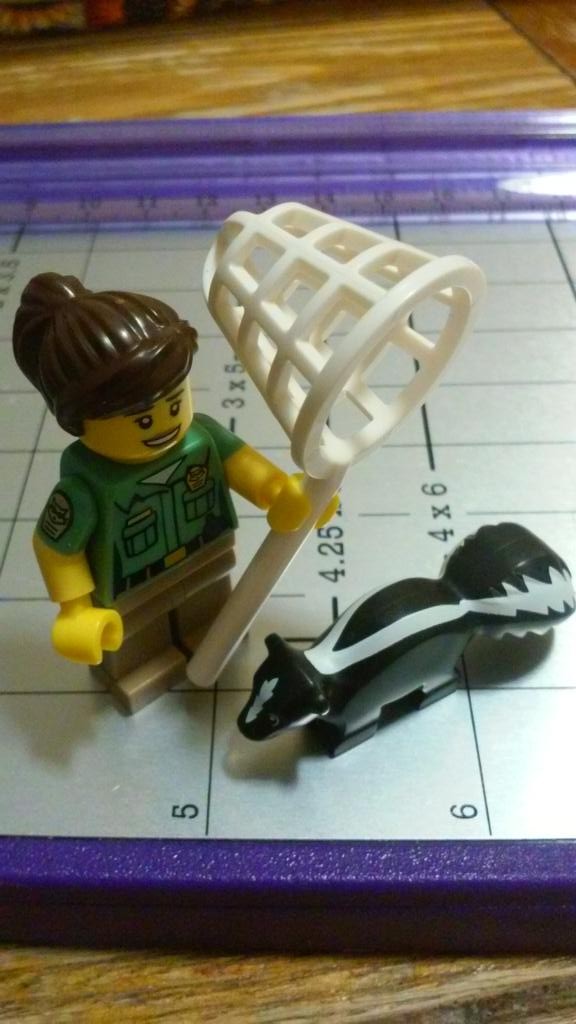 Animal Control Officer — it seems like they try to get one new uniformed character into each series, someone who would make an interesting addition to the law-abiding residents of your LEGO City. Animal control seems like a weird choice, but it’s a great female uniform, with printed short sleeves and patches, and a double-faced head. The coup de grace of course is the skunk. Any time there’s a new LEGO animal, I’ll be buying it. BECAUSE LOOK AT HIM YES WHO’S A GOOD BOY YES 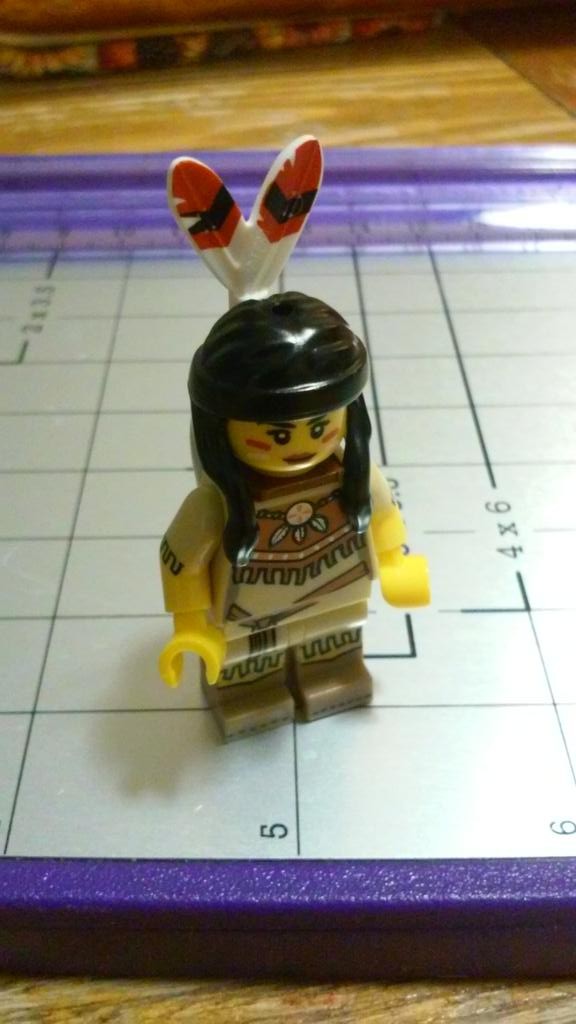 Tribal Woman — I believe this is the fifth American Indian minifigure we’ve seen in this collection, and the second woman. She’s got great printing that continues onto arms and legs, but is overall unremarkable. 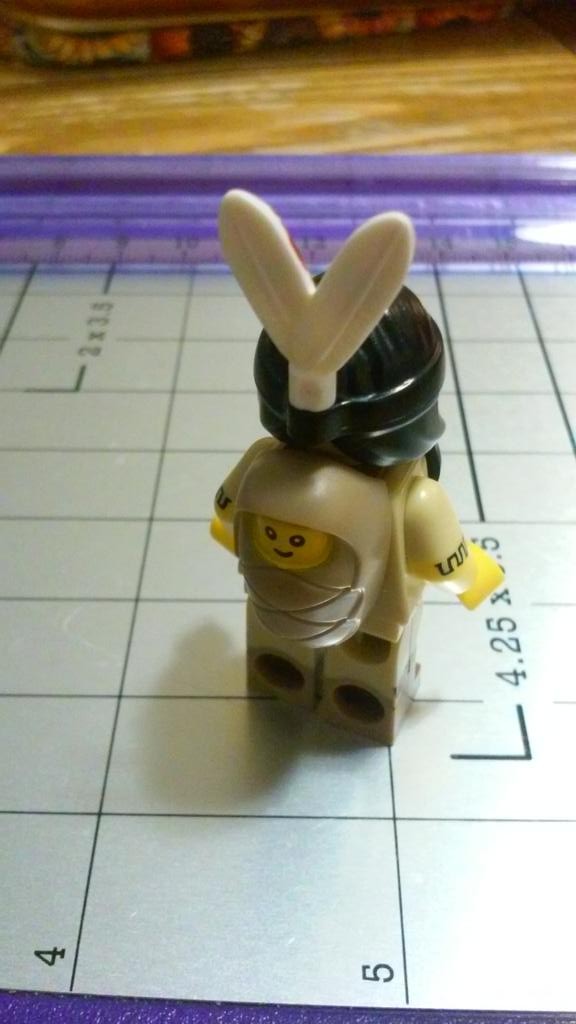 Yup. Right there is LEGO’s very first newborn baby. Here as a papoose, strapped onto mom’s back, but if you had the same bundle of joy in white or pink or blue or plaid, it could be any baby in a LEGO city or castle or space. Babies are actually big sellers at the LEGO conventions, with smaller companies making things that LEGO hasn’t gotten around to to fill the gaps. We don’t know yet if this will mean a baby boom in standard LEGO sets, but it’s nice to see the little fella/gal make a debut appearance here. 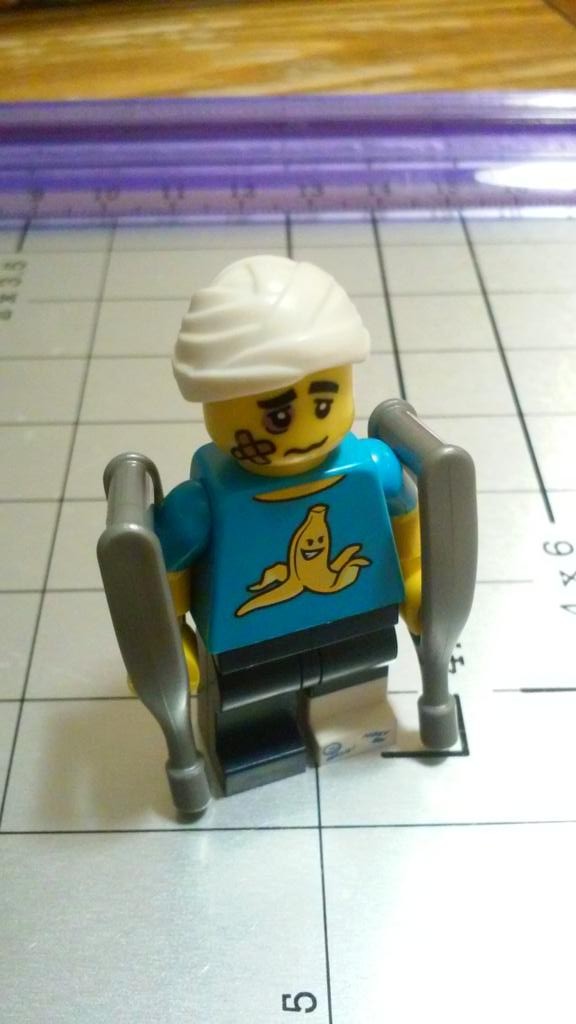 Clumsy Guy — he’s got a lot going for him. Brand new crutch pieces, a new bandaged head piece, the banana peel shirt, the injured face, the printed cast. We’ve had LEGO ambulances and hospitals for decades, it’s nice to get some new patients and equipment into the mix. For all that, my reason for wanting him was more personal. That right there is how I looked for most of this last summer, including a trip to LEGOLAND and a week with a beach house in San Diego. It kinda sucked. This guy will help me remember that. 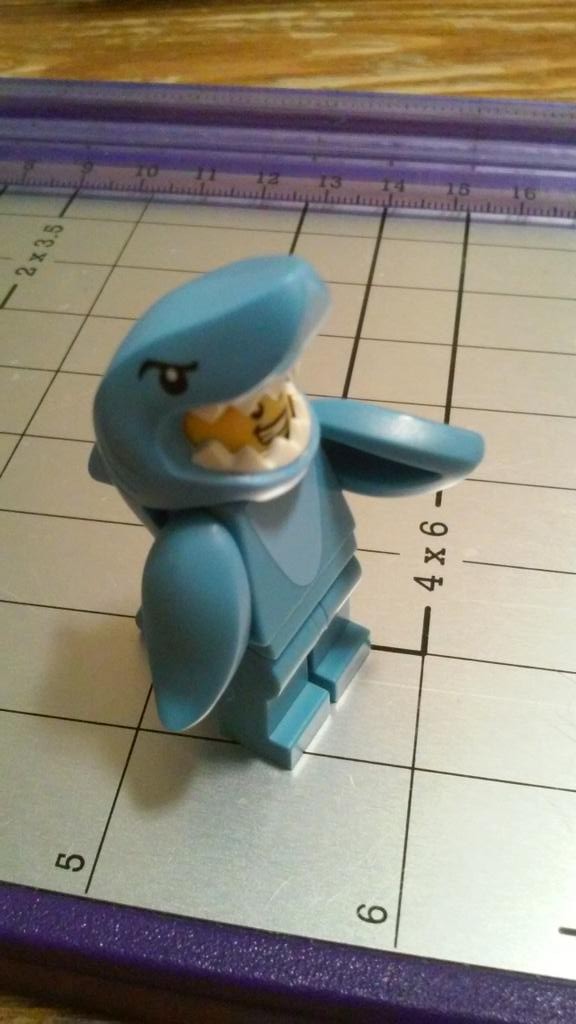 Shark Suit Guy — In almost every series, there’s been a minifigure dressed as something in a mascot-style “suit.” Dino Suit Guy, Gorilla Suit Guy, Hot Dog Suit Guy, Panda Suit Guy, Bumblebee Girl, Unicorn Girl — you get the idea. Typically they’re among my favorites in that series. Here we have Shark Suit Guy, who is simply beautiful. The head/dorsal fin/tail piece is amazing, giving him flippers instead of traditional arms, his face poking through the mouth — it’s just perfect. And whether you’re claiming he’s “Left Shark” or “Right Shark,” he’s a spectacular minifigure. 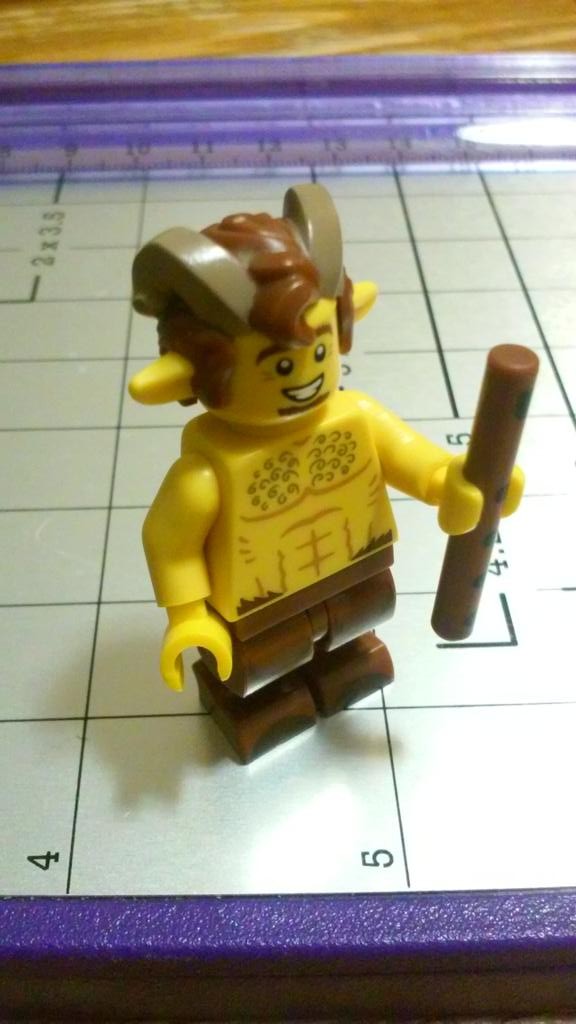 Faun — we’ve had some great characters inspired by classical mythology over the years. The Mminotaur and Medusa still rank among my favorite minifigures of all time. This Faun though–wow. That hairpiece with horns and pointy ears and Very Good Hair is all-new. The torso based on my own chest is perfect for the character. The most amazing thing? Those legs. Instead of just going with standard legs with innovative printing, they’re all-new sculpts, giving the appearance of faun/satyr/goat legs. I love that LEGO came up with such an elegant solution. I can’t think of a way they’d use those legs on any other characters, but now that the piece is out there, maybe they’ll come up with something. But now your Narnia/Percy Jackson worlds can come to life. Or to plastic. Or get sucked up in the vacuum cleaner.

So those are my top seven.

The next four on my list would be the Queen, the Janitor, Ballerina, and Winged Warrior, because they all have new pieces, but they are also complementary to other minifigures we already have. The remaining characters — I feel like I have enough knights and farmers and stuff. Although, when you need a fix…

Series 15 is in stores now, and are easiest to find at The LEGO Store, Target, and Toys R Us. Retail price is $3.99, although if you have a Kroger affiliate (Fred Meyer, Smith’s Marketplace) they frequently have sales on LEGO that drop the price below that line. Which is nice.

The next series, coming in May or June, has eighteen Disney characters. LEGO did two series of “The Simpsons,” and now it looks like they’re taking things a little further. I’m not the biggest Disney fan, but we’ve already had confirmation of Mickey, Minnie, Peter Pan, Captain Hook, Genie, Ursula, Mister Incredible, and Syndrome. It looks like it will be a good mix of Classic, Newer Disney, and Pixar, which sounds about perfect. It will be interesting to see who makes the cut. In my prayers to the LEGO gods every night I’ll be asking for some Muppets to make the list. But I haven’t been a very good boy, so…frick.