Bootleg LEGO: The Good, the Bad, and the Ugly

By Quinn Rollins on July 30, 2015 in Collectibles Comics Editorial Movies

I believe in LEGO. They’ve been my favorite toy company for a long time, and judging by worldwide sales (they’re consistently in the top three alongside Mattel and Hasbro) so do many of you. I buy it new, I buy it used, I buy it on the secondary market via Bricklink.com and eBay…but there’s a dark world of LEGO collecting that scrupulously avoided until now. Bootleg LEGO.

I’m a believer in intellectual property rights. I think companies (even multibillion dollar corporations) should make money off of the entertainment that they provide. I don’t illegally download movies, music, or comics. I have a lot of friends who do, I just haven’t gone there, and I’m not planning on it. LEGO, my favorite company, should be protected by that same moral code. And it was, until last month.

I use LEGO in classrooms. I use it to teach kids, I use it to teach teachers. I think it’s a great way to help them break out of that boring cycle of worksheets and lectures. A colleague, knowing that, saw a lot of LEGO minifigures on eBay for dirt cheap and bought them for me. She knew they were knockoffs, but figured it was just for fun, not a serious collection, and got them. When they arrived, my sons and I assembled them. They were kind of ridiculous. Mismatched colors, some joints too tight and others too loose, heads that needed tools to snap onto the torsos, faces printed crookedly on heads. The thing is, they were so close to being right, it made me curious about what other product was out there. I’ve known about “BootLEGO” for years, but thought it would be difficult to find. One eBay search later, there they were.

Having bought (and sold) plenty of toys on eBay, I knew certain things to watch for–shipping costs, lot sizes, things like that. I’m also hyperaware of every minifigure LEGO has made in the last five years, and what they should really look like if they’re authentic LEGO. Closeup pictures of some of these reveal flaws that made me pass them up. Then I saw this:

I’m a huge fan of the Flash. The comic books, the CW television series, all of it. So is my 13 year old son. LEGO has officially made one Flash minifigure–he comes in a great set alongside Wonder Woman, Gorilla Grodd, and Captain Cold. I bought it the week it came out. I love it. The set above includes a Flash in his CW-styled costume, Reverse Flash in the same, a Classic Flash, Classic Reverse Flash, White Lantern Flash, Blue Lantern Flash, Reverse Flash in the bizarre burned suit he currently wears in the comics, and even Black Flash, who’s kind of the Grim Reaper for speedsters. For $8.99. Which includes shipping.

I bought it. Sort of as an experiment. Everything looked good on the auction (not even an auction, a store with the “Buy It Now” feature, but I’ve been burned before. Would these be like the shoddy bootlegs I’d been assembling a few weeks before? Turns out, no. They arrived in a little padded package, we opened them and assembled them. Their details (real LEGO has detailed pad printing instead of decals…many LEGO customs have decals instead) were pad printed, and looked like what LEGO would do if they ever made these characters. The Flash helmet pieces…it looks like they based those on the LEGO Batman II video game, with heavy chin straps. The “real” Flash that came out this year has a more streamlined look to it. But the eight characters all have matching ones, so it comes across okay. The one problem I had with the minifigures was that one of the Reverse Flashes had two left earpieces. Bugs me a little, not enough to contact them in China and see about a replacement.

So. What if the BootLEGO is an assortment of characters, or an entire franchise, the LEGO isn’t making, and never will make. They got my money when I purchased the legitimate kit that had the Flash in it–they may make a version of the Reverse Flash someday, but those other six characters? No way. Is this akin to “fan art?” Is it like a recording of a band’s live show that their label is never going to release? I knew I had entered a moral gray area. I figured while I was there…

The next set I bought was Young Justice:

This is another case where I’ve bought each of those characters as they were officially released (multiple Robins, Nightwing, Superboy), but they haven’t, and will probably never, made Kid Flash, Arrowette, Aqualad, and Miss Martian. I love those characters. I want them to be in my DC LEGO Universe. They arrived, they were good. I will say with both sets, while they’re fine for display and probably casual play, there are some small problems. The joints are too tight. Some arms feel like you’re going to break them at the shoulder twisting too hard. For die-hard LEGO fans, there’s a tactile difference as well. The plastic just…feels cheaper. It’s still ABS plastic, but it’s a little more lightweight, it feels a little more brittle. I haven’t had any breakage issues, but it wouldn’t surprise me if it happened.

This morning as I was looking for the right eBay seller, and for images to use for the article, I came across some others that are hit and miss in terms of quality: 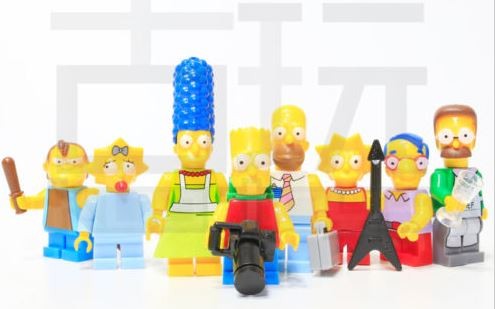 “The Simpsons” — note that things like Homer and Bart, who have short sleeved shirts in the official LEGO, are sleeveless here. That’s another layer of printing and equipment that’s very new to LEGO, and may be difficult to replicate bootleg-style. In any case, LEGO actually makes “The Simpsons” LEGO, so it would go against my personal policy. I think. 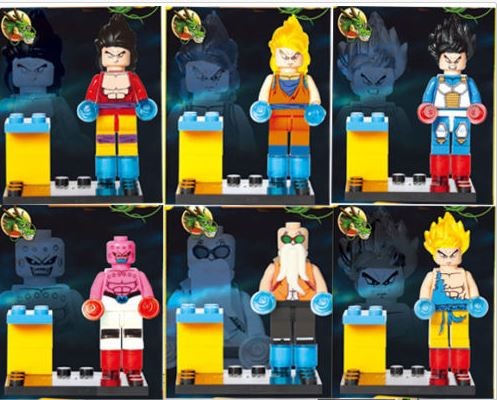 I don’t know “Dragonball Z,” and I know their anime designs may be hard to translate into plastic, but these look a little bit off to me. Their torso printing looks great, the faces not so much. LEGO doesn’t have the “Dragonball Z” license, and I don’t see them picking it up anytime soon. 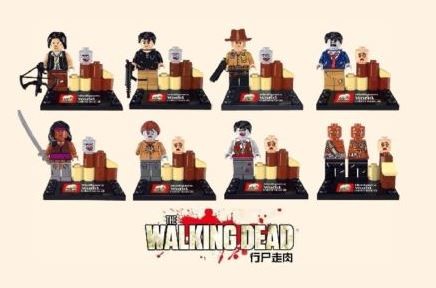 Another case where LEGO will never, ever pick up “The Walking Dead” license…and some of these characters look pretty cool. I’m not a TWD fan, but damn. Those zombies. Again, getting 8 characters for less than ten bucks…tempting. 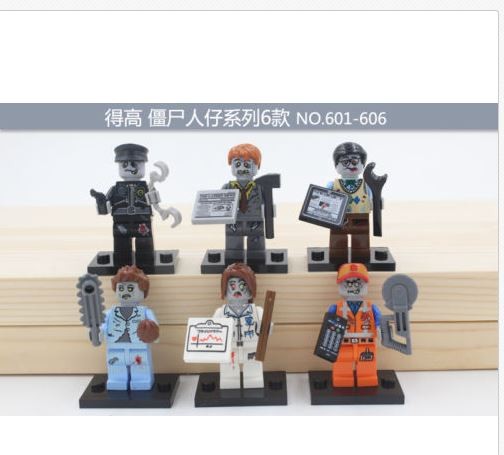 …then I kept scrolling and saw these. And had purchased them before 45 seconds had passed. Serious. PayPal, done. LEGO has made zombie minifigures, as part of their collectible minifigures line. And I’ve bought them. There are more coming in September, and I’ll buy them. But this gives me six more. Ugh I feel so dirty… 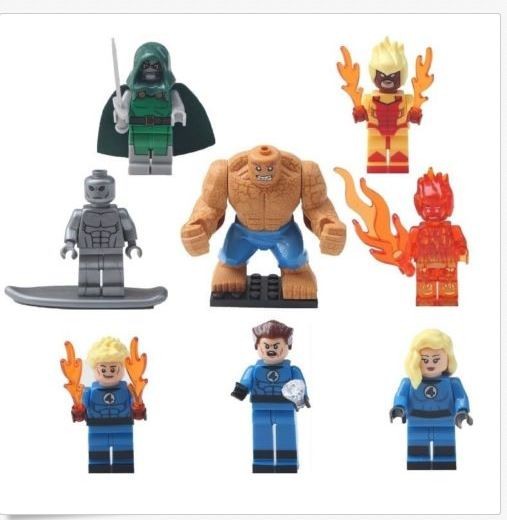 …but not dirty enough to not buy these. I’m not even a Marvel guy. But the Fantastic Four! They have a (probably terrible) movie coming out any day now, but LEGO isn’t making any toys for it. There was a Doctor Doom minifigure with a Spider-Man set last year, but the others are brand new. They’ve even got the Woody/Jessie “Toy Story” style long legs for Reed Richards, and a transparent Human Torch variant, and a Hulk/Darkseid/Grodd-styled Thing. For like eight bucks.

That’s when I logged off, in a cold sweat.

A friend asked how they could possibly be making them so cheap–if they are professionally made with the ABS plastic and pad printing and everything–what are they doing? I don’t have an answer, except that all of the equipment to make these is already there. They’ve got the technology to do it, and even though they appear to sell small volumes on eBay, add to that the enormous Chinese street markets and other venues to get them out, and they’re making a profit somehow.

We come back to the idea of intellectual property. I love DC Comics. It’s pretty unconditional. I might hate the current movies, I may hate storylines in the comics, but I have enough goodwill towards them that if LEGO made a Teen Titans Tower LEGO set for $100.00 and put my seven favorite Titans in it, I’d buy it. If they made an Aquaman Lighthouse for $100.00 and it came with Aquaman’s wife Mera and Aqualad and Vulko and a giant purple seahorse, I’d buy it. But they’re not. Is it taking something from LEGO, who isn’t using those characters? I don’t think so. Is it taking something from DC/WB when I make this purchase? Probably. I feel like that puts it into that moral gray area. Maybe I’m kidding myself. But like, I pay full price to see their terrible movies, shouldn’t I catch a break now and then?

There’s some terrible BootLEGO out there. I said I’d provide the ugly, and here it is: 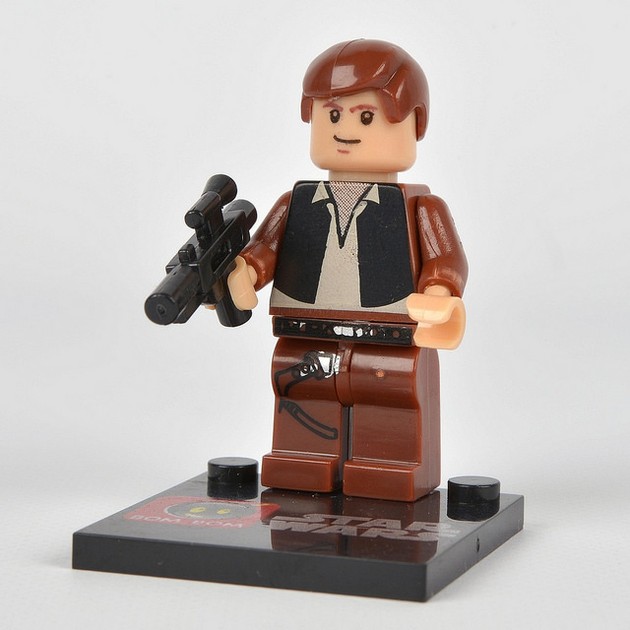 Obviously Han Solo, right? If you look closely, you’ll see things that don’t happen on official LEGO product–that flash seam on top of his hairpiece. The dotted printing on his chest, the almost Sharpied-on face, brown arms where they should be white. It doesn’t match the LEGO-accurate image on the box or on the store’s eBay page.

The worst (taken from the article “Cheap Chinese Rubbish” on Brickset) is this Anna figure from “Frozen.” 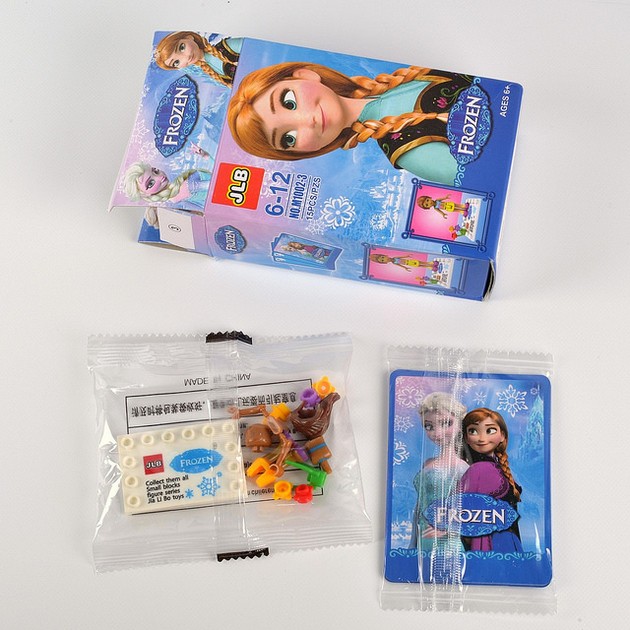 …and the LEGO Friends-style minidoll inside the box: 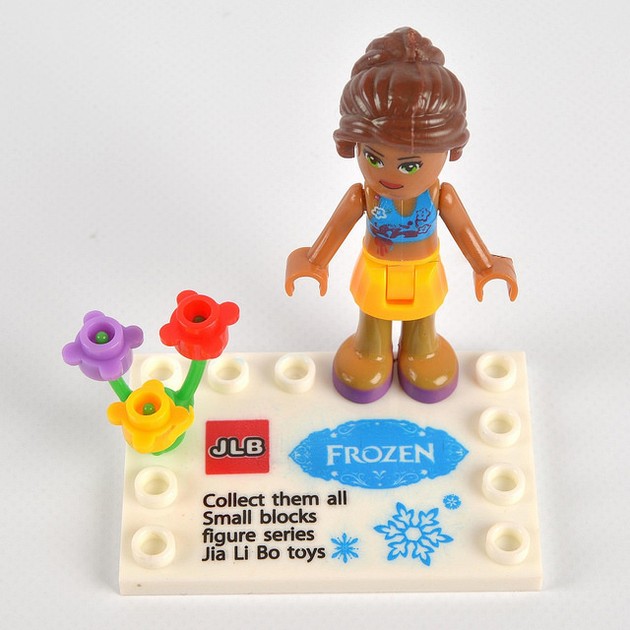 There is literally nothing on that minidoll that’s displayed on that box. So if you ordered that box on eBay, with seven other “Frozen” characters, even for ten dollars you’d be stuck with them. For reference, this is what the actual Anna minidoll looks like: 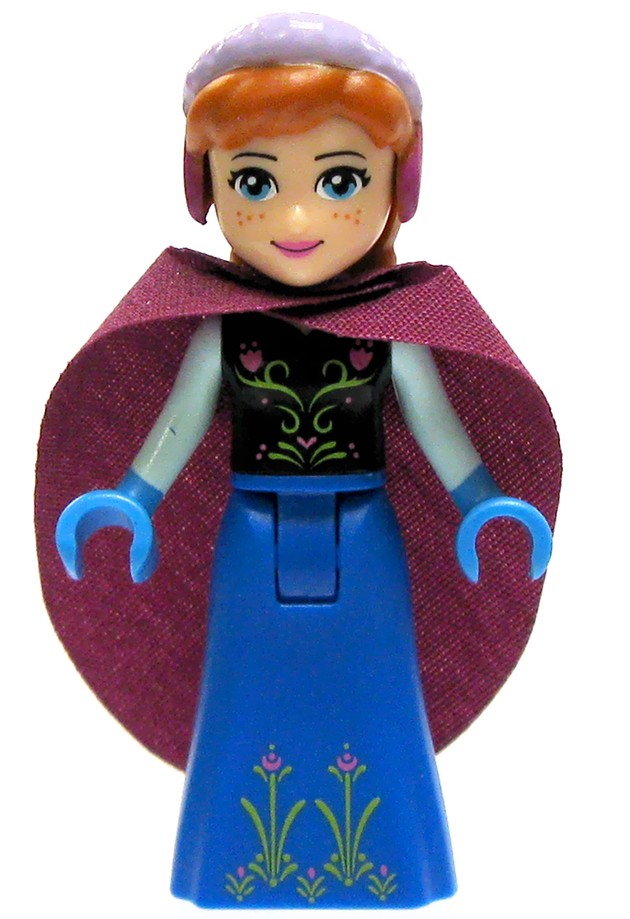 LEGO is the best in the world at what they do. I don’t like the idea of undermining their sales of actual product by supporting the bootleggers. I don’t see myself buying huge numbers (I have over a thousand real LEGO minifigures…the couple of dozen bootlegs I’ve bought are a drop in the bucket), but I’m still unsettled. But then there’s the LEGO Red Hulk. And the Iron Man Hall of Armor. And Yellow Deadpool. And Daredevil. And…I have a problem.