Black Widow Erased from Avengers 2 Scene in Her Own Toy

By Andy Wilson on May 12, 2015 in Collectibles Editorial Movies

There has been a lot of ink spilled, both digital and actual, in the past few weeks about the lack of Black Widow on Avengers 2 merchandise, in the toy aisle, and general questions about gender equity in Marvel’s House of Ideas. Joss Whedon even quit Twitter after a barrage of angry tweets that he had somehow maligned or marginalized Agent Romanoff in her big screen role in the year’s biggest movie.

But, if you’re like me, you took one look a those critiques that she was “damseled” and said, “She drives a motorcycle out of a moving airplane. Your argument is invalid.” It’s been hard trying to thread this needle of defending Marvel for doing great things like renewing Agent Carter and what’s happening in Thor #8 this week and the general way Joss Whedon writes his female characters, while also seeing some problems with the execution of parts of Age of Ultron and major missteps in the marketing and merchandising of the film. It simply feels like the right hand doesn’t know what the left is doing.

And then, this happened: 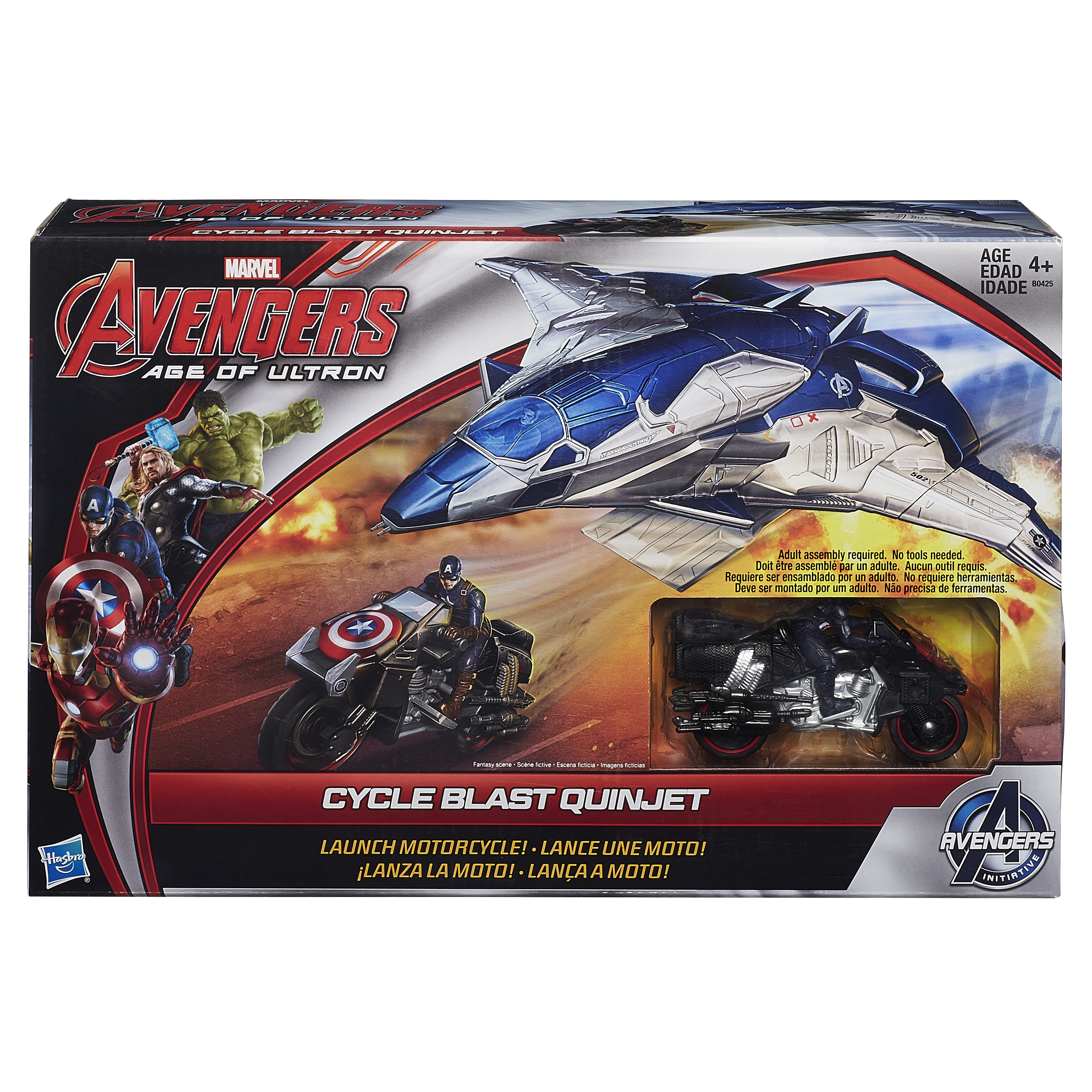 You take one of, if not the single, coolest moments in the movie and you erase the female character and replace her with Captain America? Let’s remember what that looked like again:

Not cool, Marvel. Not cool, Hasbro.

First of all, I REALLY want a toy of that.

You want to give me Captain America on a motorcycle? Great. That toy exists. Like a billion different versions of them. I own a couple of them.

You want to make a cool Age of Ultron Captain America motorcycle toy? Do one where he flips the bike and then throws it. THAT’S what I saw in the movie. He does not ride out of planes on them.

Don’t get me wrong: I love Captain America. So much I’ve written extensively not just once, but twice on WHY I love him so much. I’ll buy me the hell out of some Cap toys. In fact, I have a Black Widow toy from last year’s Legends Winter Soldier line. But at $20 a pop, these weren’t for our average kid who just wants a to play with.

There is also tons of pent up demand for Black Widow toys. Somewhere someone got it through their heads that a) girls don’t play with action figures (they do. As a father of a 10 year old girl and 7 year old boy, they like playing with dad’s Star Wars and Avengers toys exactly the same amount) and b) adult collectors don’t buy female characters.

It’s the sad truth that in America today, nowhere will you find more strict gender norming and segregation than the to section of your nearest big box retailer. Boy toys go here, full of action and adventure, and the girl aisles are filled with pinks and purples and taffeta dresses and dolls and domesticity.

Even Lego is segregating their toys for boys and girls now. Even DC is marketing a specific line to girls. One one hand I’m glad that Legos and DC superheroes are getting to girls. But they shouldn’t have to be marketed in pink hearts and flowers, and they shouldn’t be ghetto-ized (in the original sense of the word– to segregate and put in less desirable location) and marginalized.

So the fault, dear Brutus, is not in our toys, but in us. We’re the reasons we can’t have nice things.

But it’s also hard to break this cycle if we’re never given the opportunity to go out and buy these figures.

Hasbro seems to have taken the wrong message in the fact that their Slave Leia Black Series figures didn’t sell as well by pulling a future Leia figure, never considering that for maybe some of us, we didn’t want to buy a Leia action figure not because it was Princess Leia, but because it felt icky and weird to buy an action figure that is literally a sex object. And let’s not forget the difficulties in finding Hera or Sabine action figures for Rebels. . .

So, there it is. The problem is endemic. And this is simply the most recent, and most egregious, case of it.