‘A Wrinkle in Time: The Graphic Novel’ Review

By Quinn Rollins on October 9, 2015 in Books Comics Reviews

Big confession: I’ve never read “A Wrinkle in Time.” So even though this graphic novel is an adaptation of the classic fantasy work by Madeleine L’Engle, I can’t speak to how good it is at adapting that original novel. I’m just reviewing it on its own. I wasn’t a big fantasy fan when I was a kid — I didn’t read the Narnia books until I was in college, and “Lord of the Rings” in my mid-twenties. I’ve tried to read “A Wrinkle in Time,” but became passionately indifferent about fifteen pages in. My goal in reading the graphic novel was as much to see what the story was as to check out the comic, which has rave reviews. 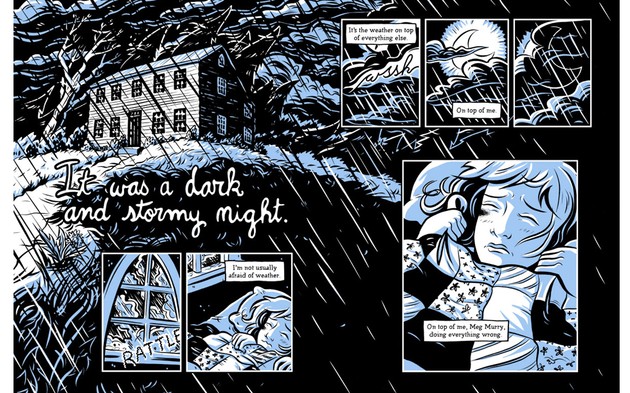 The story follows Meg Murry on a missio to save her father, gone missing while doing some sort of sciencey top-secret work for the government. Meg comes across as a weepy, unlikable character, but chiefly unlikable because she doesn’t like herself. That makes it a tough sell for me. Her solace is in her little brother Charles Wallace, and to a lesser extent her mother, who spends more time grieving the loss of her husband. Meg, Charles Wallace, and Meg’s new friend Calvin O’Keefe end up in the company of mystical beings: Mrs. Whatsit, Mrs. Who, and Mrs. Which. These women help the children travel through tesseracts–“wrinkles” that pass through time and space. Like the TARDIS without a police box. They eventually find Mr. Murry, captive on a bizarre planet Camazotzheld. It’s up to Meg, Charles Wallace, and Calvin to save him and save themselves.

The characters grew on me throughout the book, as they found strength, became heroes, and learned more about the unique world they were discovering. I liked the mentoring of Mrs. Whatsit, Mrs. Who, and Mrs. Which — being there as teachers and guides until they couldn’t help Meg anymore, and she had to go it on her own. It follows the template of the Hero’s Journey, and does let Meg emerge as her own hero. I also liked seeing the explanations of the tesseracts and how the fifth and other dimensions would be incomprehensible to us, but can still be explained. Many of these same ideas have been revisited by “Star Trek” and other series, including the idea that the great geniuses of human history were somewhat more than just geniuses. 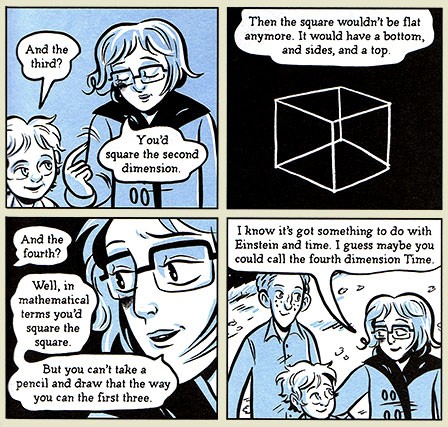 The artwork, in shades of black and blue, is simple enough to tell the story, and in a style that also grew on me in the course of reading. Charles Wallace is a little too moony eyed, a little too precious, but other characters like Aunt Beast and her people, and the visual interpretation of the noncorporeal characters was cool. It’s just cinematic enough to tell a story, without falling into the trope of Making A Movie On The Page like many contemporary graphic novels. 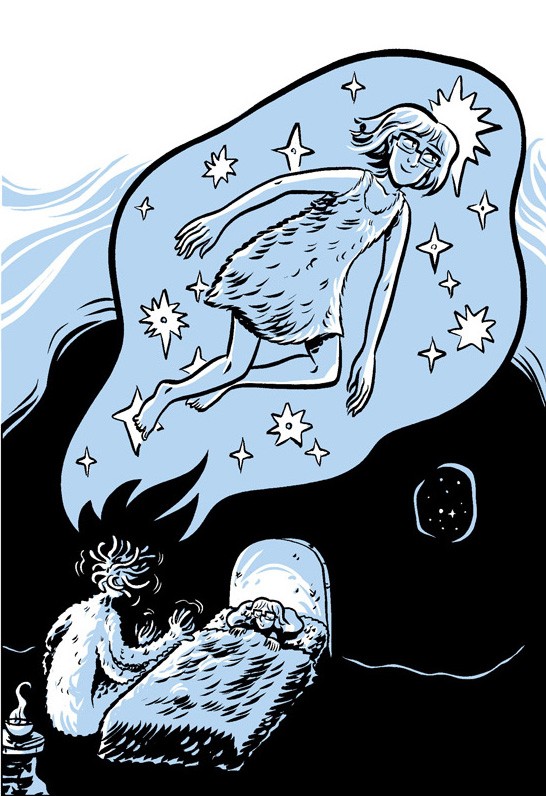 In all, I came to enjoy the book, but I didn’t love it. It’s well done, and I’m curious to know what a fan of the original L’Engle work would think of the graphic novel. Adapting a classic work to a different format is always tricky; part of the reason the original becomes a classic is the language the author uses to tell it. A graphic novel omits most of that language, interpreting those words for us visually. Something’s lost, something’s gained. It would be interesting to see what a fan of both worlds thinks of “A Wrinkle in Time: The Graphic Novel.”