‘The Caped Crusade: Batman and the Rise of Nerd Culture’ Review

By Quinn Rollins on January 5, 2017 in Books Comics Movies Reviews 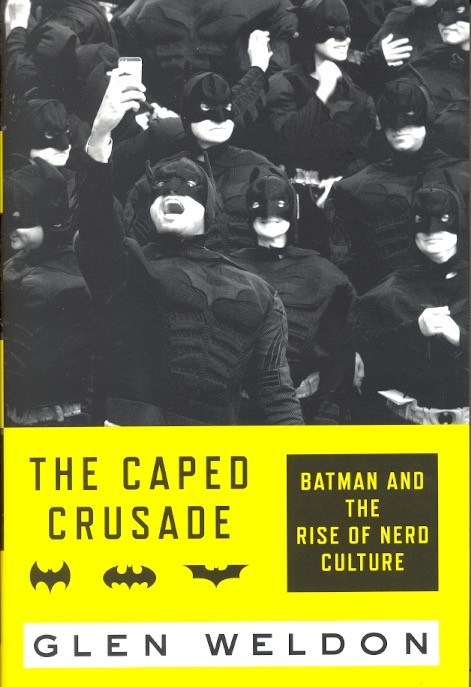 I know a lot about Batman. I say that with nearly equal parts pride and shame. I read way too much, I collect way too much, I…pretend I’m Batman in my head way too much. These things create a perfect storm of obsession, and one that results in me having a brain full of Bat-trivia that I don’t necessarily want, let alone need. That may be part of the reason it took me the better part of a year to get around to reading Glen Weldon’s latest book “The Caped Crusade: Batman and the Rise of Nerd Culture.” I kind of assumed I knew it all. So although I enjoyed his “Superman: The Unauthorized Biography,” I held off on the Bat-book. I shouldn’t have.

Weldon does what I expected him to: give us a telling of the history of Batman, from 1939 through today. He carries us chronologically through the very first stories, often credited to Bob Kane but with the lion’s share of work done by Bill Finger. He traces the evolution of Batman and Robin through decades of comic book publishing, and connects the small and great shifts in character to historical and pop culture events happening at the same time. He provides an entertaining look at how the 1966 “Batman” television series came to be, and the explosion of Batmania that accompanied it. We see the darkening of the Dark Knight through the 1970s, the grittier even more darkening in the 1980s, and the renaissance of public interest that came with the movies from Keaton through Bale and beyond. I expected all of that. And I got it. If you don’t know as much about the history of Batman, but just know you love the character and his heroics, this book is a great primer for how Batman became the Batman you know and love. Whether the one you love is the one currently on screens and comics or some version of the past, you’ll meet him in this pages. The vast majority of the things in these pages “I knew already.” But reading again with Weldon’s voice and analysis made me love and geek out over the history of Batman all over again.

There’s a darker side of fandom as well

What I found even more interesting, what I didn’t understand before reading, was the second part of that subtitle — “the Rise of Nerd Culture.” Weldon connects Batman with extreme fandom: nerd culture. People like me, essentially. People who latch onto a character, a book, a movie, a game, and want to know everything about it. They feel like those characters are friends or family. They write fan fiction, they create art, they go to comic con, they collect, they cosplay. There’s a darker side of fandom as well, where those fans can turn ugly when they think those characters are being mishandled. They threaten boycotts, they rail online about how Ben Affleck will be “the Worst Batman Ever” (he wasn’t), they send death threats to creators. Weldon finds the seeds of that even in the early days of comic books, but finds the real spark in the 1966 television series. When it premiered, it was met by the general public with delight, but by many nerds with rage:

“They began to shape, for the very first time, the sentiment that all nerds who followed after them would employ whenever they found their niche interests embraced by the mass culture: ‘You do not appreciate this thing you profess to love in precisely the same way, to precisely the same extent, and for precisely the same reasons that I do.’ Or, more simply, ‘You’re doing it wrong.'”

We see these voices grow more strident and with more places for expression over the years — now of course everyone with a Twitter account can voice their rage, despair, and condemnation — and gain followers and create narrower and narrower niches of fandom. Weldon seems to see that expression as valuable, but also needlessly splintering. It’s okay to like things differently from someone else.

With all of the vicissitudes and controversies in the book, it would be easy to come away with a bad taste in your mouth about fandom, or even about Batman. But Weldon’s voice is positive, the anecdotes are funny, and he sees the most recent evolution of Batman into a “grand unified theory” — that is, all versions of Batman can coexist. If you hate Ben Affleck’s Batman, there’s always the best Batman (“Batman: The Animated Series“)(my opinion)(and Weldon’s)(and yours) to retreat to. If you’re a fan of Batman, there will be something Batmannish about a New Batman that you can find to appreciate. And if not, there’s always the internet. Let your hate flow.