By Quinn Rollins on March 8, 2015 in Books Collectibles Movies Reviews

Warren Elsmore is a world-renowned name when it comes to the LEGO community. The UK-based artist was a fan favorite online for more than a decade before beginning a professional career working with the toys in 2012. His fame has grown with the publication of his first two books, “Brick City” and “Brick Wonders,” which both showcase his talent in building cities and structures of his own design, alongside world landmarks both ancient and modern. His third book is this one, “Brick Flicks: 60 Iconic Movie Scenes and Posters to Make from LEGO.”

The 2014 book is a natural fit; there’s a big geeky crossover between those of us who love LEGO and those of us who are movie buffs. So I picked it up thinking it’d be a home run. I don’t think it was that home run I was looking for, but there were a lot of good plays.

The movies are organized into four categories: Sci-Fi and Horror, Drama and Classics, Action and Adventure, and Comedy and Musicals. Each movie gets at least a two-page spread, with full-color photos of a scene (except for a few black and white movies, of course) from the movie, sometimes a movie poster. There’s a sidebar that includes the year the movie was made, the director and stars, and a brief synopsis of the plot. Most of them have a little bit of trivia about the movie, and it’s enough to make me want to see the movie again. Looking at the list of movies, there are only two I haven’t ever seen: “Death on the Nile” and “Lara Croft: Tomb Raider.” One of those feels I’m a little embarrassed about, the other I’m fine with. 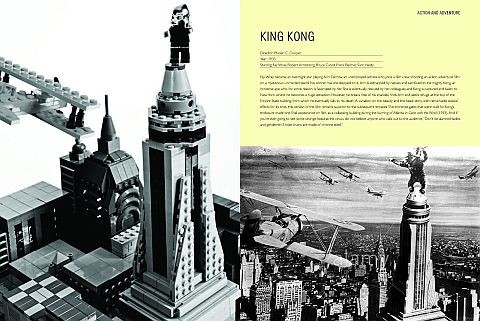 It’s a great list of movies, some truly classic, some cult classics, and some that are just so big that Elsmore couldn’t have left them out. But for someone so well-versed in LEGO, the builds are surprisingly uneven. The scene from Hitchcock’s “The Birds” is a group of black bird pieces perched on a serviceable but simple jungle gym, which is adequate. The “King Kong” has the ape perched on a great brick-built version of the Empire State Building, with biplanes and the rest of the New York skyline in the background. Love it. But then “Psycho” just has a close-up of a female minifigure, face in mid-scream. Of course, the shower scene is the most famous from that movie, but it doesn’t make a good LEGO illustration. If you’re going with “Psycho,” maybe have Bates Motel at the top of the stairs? Something that makes for a better picture.

There are others where the most famous image is just one person; Ursula Andress in the bikini from “Dr. No,” Audrey Hepburn with her cigarette holder from “Breakfast at Tiffany’s”…they’re cute enough images in LEGO form, but they’re not enough to buy a book. My other issue with them is that the book’s subtitle leads you to believe that these are things that you, too could build out of LEGO, but in reality, most of the minifigures aren’t ones you’d just have lying around the house, or even ones you’d be able to purchase at the store — you’d need to go to the UK site Minifigs.me, and purchase them there, to the tune of about $20 each. They’re some great-looking customized minifigures, don’t get me wrong. But about halfway through the book, it just started feeling like a commercial for them. There are some fantastic things on their site, by the way, and it’s worth looking around. Like if I had $150 to drop on this “Firefly” set, I would. In fact, I might. But not today. Marriage. 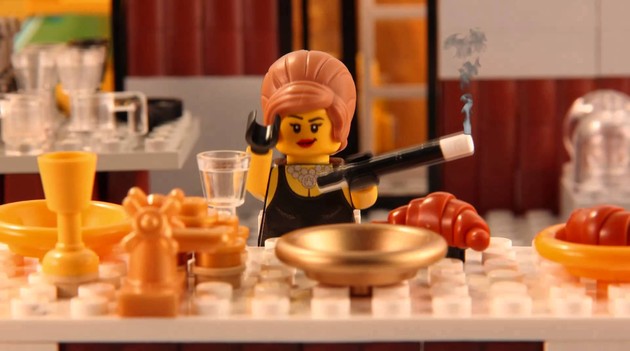 The other feature of the book is that there are several inset instructions for building your own versions of props, vehicles, and settings from movies. The fire escape from “West Side Story,” the police car from “Blues Brothers,” the boat from “Life of Pi.” Each is small enough and simple enough that you really could build it from pieces around the house.

Other than my issue with the customized minifigure commercial, if you’re a movie and LEGO fan, this intersection of the two is enjoyable enough. There are some geeky touchstones like “Blade Runner” and “Tron” that are included, and a few inexplicable exclusions, like “Star Wars.” At first I figured “Star Wars” was off-limits because LEGO actually makes those sets, but “Indiana Jones” and “Jurassic Park” are in the book, and LEGO has made those too. Other favorites are the black and white classic films that Elsmore throws in, including “Citizen Kane,” the Laurel and Hardy short “The Music Box,” and even “A Night at the Opera.” Those are ones that I wouldn’t have thought to include, but Elsmore does, and that’s keen. 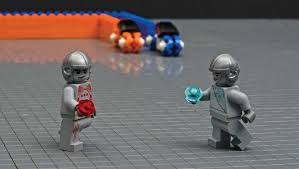