Let’s go to the Ultra Con! – Guide to Surviving Comiket

Guest author Kondroid is here with the second part of this year’s Comiket coverage – his Guide to Surviving Comiket! 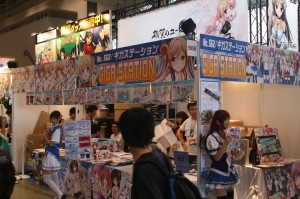 1- ACCOMMODATION. Don’t expect to be staying anywhere near the convention center itself. Any room that will still be available (hint: better luck finding a speck of pepper on a black sand beach) will be astronomically priced. Find somewhere to stay elsewhere in the city and just take the train in like everyone else does. 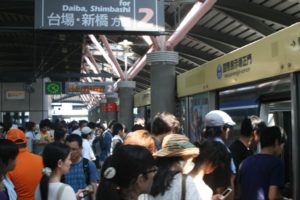 2- GETTING THERE. As mentioned above, take the train. The Yurikamome line or the Rinkai line will take you right to the convention center… the only issue will be, it will seem like everyone one else in the entire city will also be riding the train that day. Overcrowding does not even being to describe it. Be prepared for the worst. Once you get out, don’t even worry about trying to find the convention center if you’re not sure where it is. Just follow… 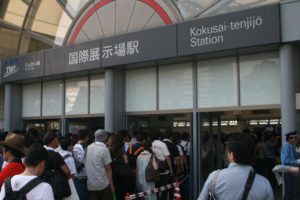 3- THE LINE. Expect to be in it for a long time. “Oh, I’ve been in long lines before–” … no. Not like this, you haven’t. The world “Colossal” does not do this line justice. It starts early in the morning, as overnight line waiting is not allowed, meaning the truly devoted have no choice but to catch “first train”, normally getting there around 5am. By the time the doors open at 10am the line stretches further than you can see, from every corner of the massive Tokyo Big Sight convention center. 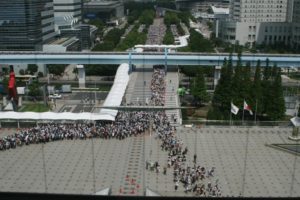 Bringing a DS or PSP should be a must-have – anything to take your mind off the tedious standing/shuffling around (they will move the crowds into more organized lines closer to opening time, so be ready to move when they tell you). 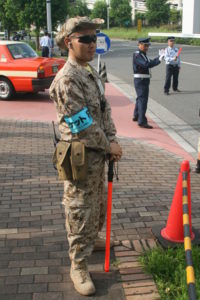 4- FOOD. Surprisingly, food is not too over-priced at the various vendors inside and around the convention center. Still, it’s probably a better idea to bring something to eat and drink with you. Bring something to keep you going while waiting in the line in the morning, as well as something to munch on over the course of the day. Just a note, though: try not to walk around while eating, as Japanese people consider it rude (don’t ask me why, no one really knows for sure!). 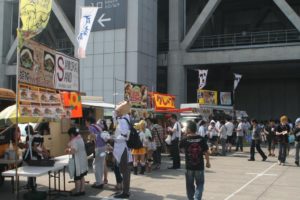 – Food vendors outside the convention center. – 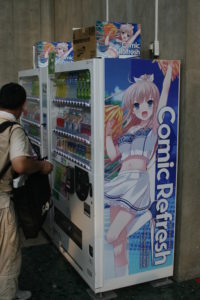 – If you’ve got plenty of ¥100 ($1) coins with you, then you can take advantage of the many vending machines around. Just be warned that under heavy traffic they can run low (or empty) of your favorites (Have you tried Pocari Sweat yet? It’s a must when trying Japanese vending machine drinks for the first time!) –

5- INSIDE. Once you get in to the halls themselves, good luck trying to navigate the sea of people. Comiket is divided into several halls, each of which is the size of several football fields. Depending on what day you’re attending, those halls will be divided into different themes based on what is available in each area. If you’re attending in hopes of finding something particular, your best bet would be to purchase the Comiket Catalog before you come (available at comic stores around Tokyo, as well as online), so you’ll know exactly where (and when) to find the vendors you’re after. Once you find them, however, depending on how popular the circle in question is, you may be required to wait in ANOTHER line just to purchase their doujin. If you’re only interested in doujin from top circles, you may find yourself standing in lines all day and only having a handful of comics to show for it. 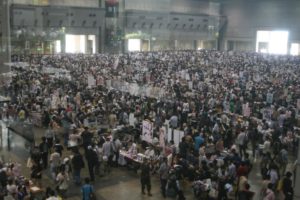 6- WHAT DAY TO GO. Yes, this makes a massive difference. Because there are so many circles vying to get in to peddle their wares at Comiket, they’ve had to restrict who is allowed to sell what on certain days. As a result, days have “themes” assigned to them. Day one is “girls day”, with the majority of vendors displaying all manner of homoerotic match ups from everything you can think of (even if you didn’t want to imagine what a romance between Yoshi and Luigi would look like). Day two is devoted to more “normal” stuff, with day three being the biggest: “guy’s day”, with your regular run-of-the-mill hentai stuffs (largely devoted to whatever the current popular anime is – this years favorite was ‘Madoka.’). 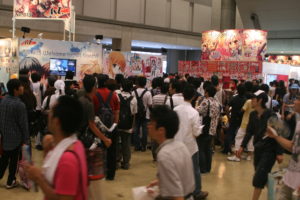 7- SHOPPING. If you’re planning on buying anything, please don’t whip out a ¥10000 (about USD $100) bill for that ¥300 (about USD $3) comic and expect to see a smile on the vendor’s face. If they run out of change, they do not have the luxury of dashing off to get some more. Carry around a stack of ¥1000s ($10’s) in your wallet and you will be everyone’s friend. Also, if you missed out on picking up that Naruto doujin from your favorite artist you had had your heart set on, not to worry… There’s a pretty good chance you might be able to pick it up in Akihabara or Otome Road from one of the many doujinshi re-sellers that exist… for an exorbitant mark up (the average price for a doujin sold at Comiket is about ¥500 ($5). To find one of these doujin at a shop later may run you ¥1500 to ¥5000 ($15 – $50), depending on how rare and in demand it was. Some doujin can ever make it as high as ¥10000+ ($100+)… suddenly you can see why there is such a rush to be the first one in the doors to buy a certain doujin before it sells out). 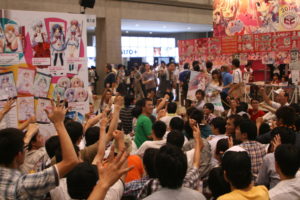 8- COSPLAY. This is important. If you are planning on cosplaying in Japan (this goes for anything, not just Comiket), DO NOT WEAR YOUR COSTUME TO THE EVENT. This is considered to be in extremely bad taste by Japanese cosplayers. There are changing areas where you are expected to change into your costumes (once inside the con) and storage areas for you to ditch your bags. This year’s Comiket saw a “crackdown” on skimpy costumes, with new rules such as “no visible underwear” and “not too much exposed flesh” being enforced…. This didn’t stop everyone from pushing the envelope, though. 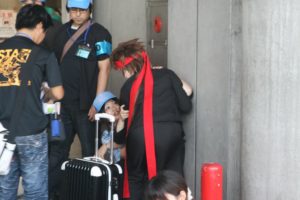 – Cosplayers will often show up with a suitcase containing their costume and change once they have reached the designated changing areas. There are places to check your suitcase during the day so you don’t have to lug it around. –

Once you’re in costume, you’re free to walk around anywhere you like. Just be prepared to be inundated with requests to pose if you’re in the cosplay photo area. (Note: if your costume is particularly good, you may be getting more requests than you can handle. Feel free to say no if you wish.) 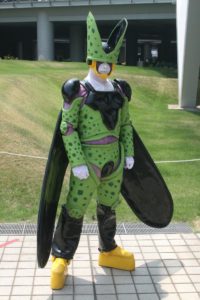 9- PHOTOS. Common sense prevails when photographing cosplayers. Always ask. Even if there is a crowd of people already taking photos themselves, always ask. There’s one catch, though: do not, I repeat DO NOT take photos of cosplayers outside of the designated cosplay photos areas. YOU WILL BE KICKED OUT IF YOU DO NOT ADHERE TO THIS RULE. This is not an exaggeration. The rule applies to attendees taking photos, attendees having their photos taken, cosplaying vendors sitting at their booths, and even staff in costume. The one exception is the corporate booths who employ professional cosplayers to dress as their characters, but even then, you still need to ask. One note of courtesy would be try not to clog up foot traffic, as that was the main reason the rule was created in the first place. 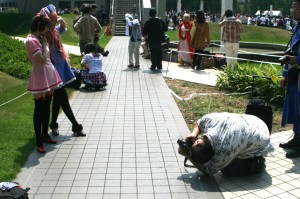 – Cosplay photography: don’t do it like this guy… unless you ask first. –

10- LEAVING. As was mentioned in my last article, once 4pm rolls around the whole  con shuts down for the day. By that time the majority of the crowd will have disbursed. Everyone will have picked up what they were after and headed home – or off to Akihabara to sell their swag and/or find what they had missed out on while it may still be in stock at the doujin re-sellers (for probably triple its original price). The congestion getting back to the city is just as bad as getting to the con itself and goes well into the night. If you’re not in a hurry to get anywhere, your best bet would be to jump on the train heading in the OTHER direction (away from the city), go a few stops till the train gets to the end of the line and turns around, thus ensuring you’ll have a seat all the way back! (common sense, you would think, but only ever see a handful of people exploiting this seemingly obvious tactic).

And that’s it!
So do you think you have what it takes to tackle the biggest con in the world? (or more importantly, now that you know what it’s all about, would you even want to?)
x__x

…check out part three of our Comiket coverage coming tomorrow – The Cosplay of Comiket! 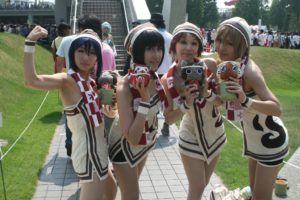