By Aldo Gomez on May 25, 2018 in Anime Reviews Television

Fooly Cooly Season 2, also called Fooly Cooly Progressive, is a new installment for the 2000 anime series Fooly Cooly, or as its stylized, FLCL. The new season is set to start airing on Adult Swim on June 2nd, but regardless of whether or not you have already seen the original series, the first episode is as good an entry point as the original.

The first episode for FLCL Progressive starts off with brand new characters Hidomi and Iide, two junior high students, as they begin to learn about themselves while also fighting giant robots and space aliens. Hidomi is a 14-year-old girl that wears cat ear headphones at all times to quiet down the world around her, she lives with her mother who adoringly calls her Hidomi-chan and asks her to act like a typical anime girl and uses Japanese words in her English dialogue like an anime fan. Iide is a 14-year-old boy in the same class as Hidomi, and while she is quiet and anti-social, Iide can be seen with his two friends discussing his love life.

The episode kicks into high gear when Hidomi is talking to her mother and is suddenly ran over by mysterious lady in a blue vintage car, attempting to kill her before she could “overflow” and apologizing that Hidomi will, unfortunately, be alright. Hidomi, shaken up by the event, tries to make heads and tails of what is happening and is suddenly attacked by a large robot that uses her classmate Iide as bullet. The two must then run away before being saved from the machine by the mysterious lady from before, using a bass guitar as a weapon. 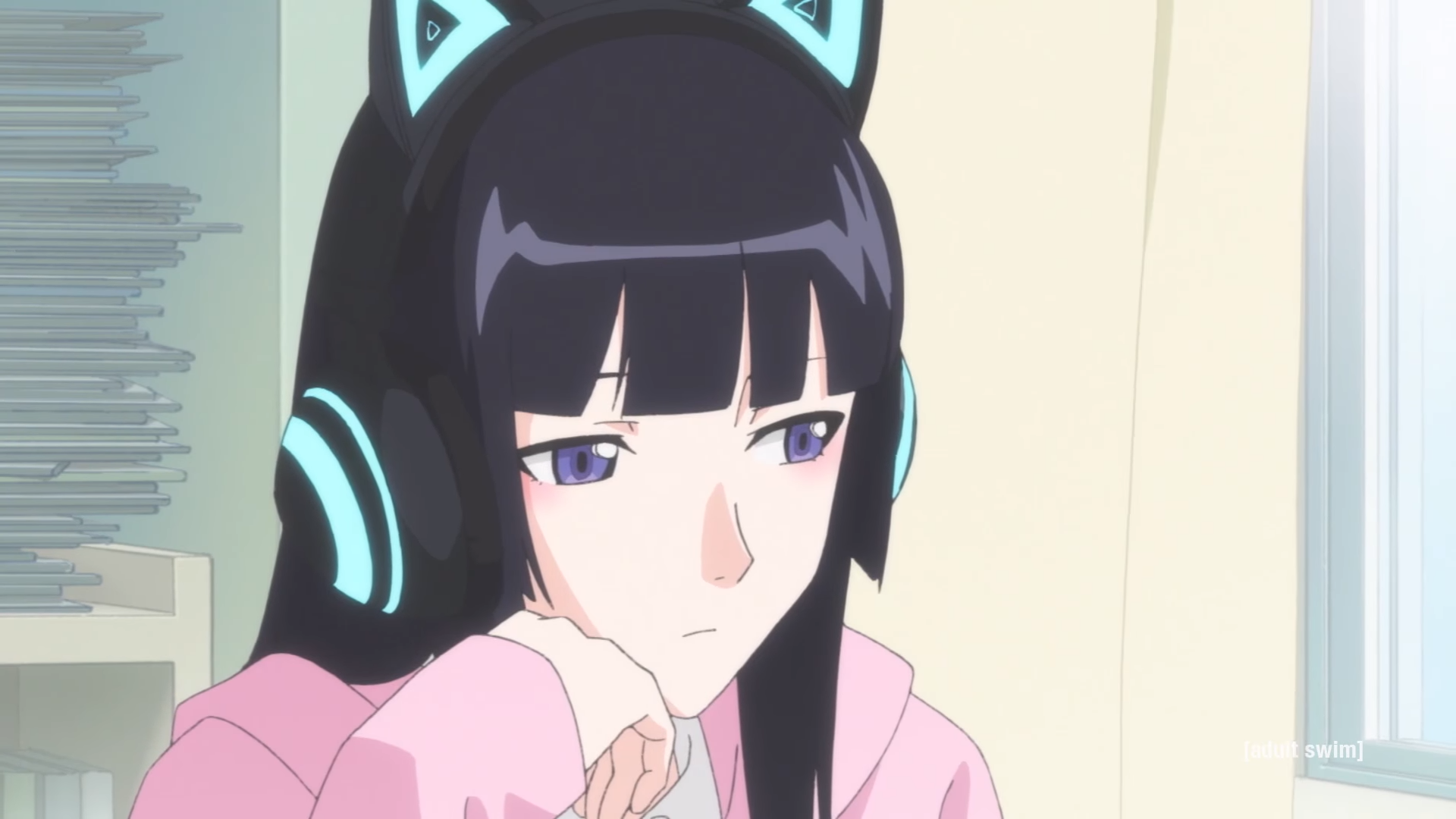 Fans returning to the franchise will appreciate all the callbacks to the original series in this episode, from mysterious women in vehicles ramming into teens to the mechanical designs of the robots that appear from heads. The art style is much cleaner and refined than it was in the original, but we never reach the frenetic energy of the original first episode’s comic book segment or slow-motion CPR. There are a lot of references here, not just thematically and visually, like Iide having a forehead bandage like that of original protagonist Naota, a pair of binoculars that have a tag with the name Mamimi on them, and a familiar yellow vespa that is seen throughout the episode.

The theme this time around seems to be more about finding your place in life and figuring out where you need to go once you become an adult as Hidomi wanders through life, not sure of who she is and how the people around her see her, as well as a struggling relationship with her mother. This in contrast to season 1’s Naota, a young boy wasting away his youth pretending to be an adult.

The third season, FLCL Alternative, had its first episode aired for April Fools in Japanese with English subtitles and from the subtitle and cast we can already tell that it should be its own story, very much like FLCL Progressive, though both shows are borrowing a lot of themes, visuals and characters to tie everything together. That season premiere will get the attention it deserves when it airs in September of 2018.

If you haven’t seen the original 6 episode Fooly Cooly series from 2000, it is available on Blu-ray and streaming via FunimationNow. Fooly Cooly Progressive airs on June 2nd on Adult Swim’s Toonami block.